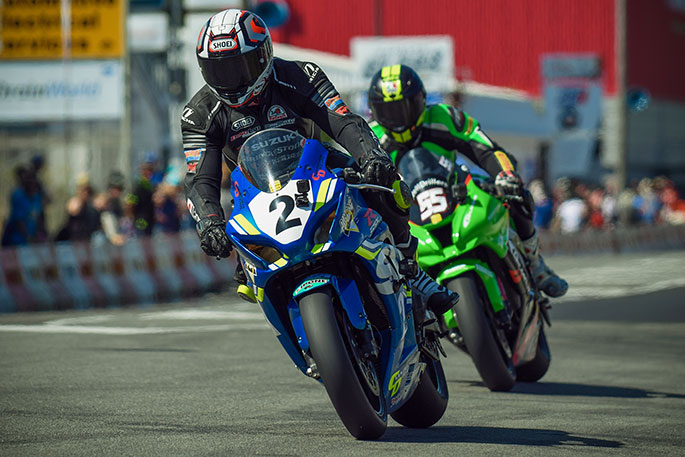 Motorcycle racing's always-popular Suzuki International Series is set to start next month and is shaping up to be an entertaining event.

It is certainly going to be another scorching summer of motorcycling this year with the annual Suzuki International Series road-race competition again absolutely swamped with entries and organiser Allan 'Flea' Willacy sure he will again have trouble fitting them all in.

Willacy is overjoyed with the huge interest being shown by riders and he believes the 2020 edition of the series, set to kick off at Taupo's Bruce McLaren Motorsport Park on December 6, will be massive.

Manfeild follows as host venue a week later, on December 13, and the action wraps up on the public streets of Whanganui’s famous Cemetery Circuit on Boxing Day.

"It's almost unbelievable, but entry numbers are up on last year," says Willacy. The Formula Three and Sports/BEARS classes have already been closed off for a week now."

This popular three-round series is New Zealand’s most esteemed motorcycle competition and it has again attracted a huge number of top-calibre riders.

Willacy says members of the public could save money by purchasing "early bird tickets" through Ticketek on-line and then they'll also go in the draw to win an upgrade to a Suzuki VIP Pass.

Suzuki’s former national and Suzuki International Series champion in the F1 class, Wellington’s Sloan Frost, will be determined to win again, while Taupo's Scott Moir, the Suzuki International Series outright winner in 2017 and again in 2018, and Suzuki’s 2019 national superbike champion Daniel Mettam, from Glen Eden, won’t be taking a back seat either.

They will be joined in the Suzuki superbike ranks this year by the 2020 New Zealand Supersport 600 champion from Whanganui, Richie Dibben, and while it'll be Dibben's debut on a 1000cc bike, it pays not to ignore the likely threat he'll pose.

Remember, Dibben was also making his debut when he won 600cc title this year and so the "rookie" tag is obviously not something that should really be applied to him.

Fellow Whanganui rider Jayden Carrick also steps out this year on a Suzuki GSX-R1000 and former 600cc frontrunner David Hall, from Te Awamutu, also joins the superbike brigade for the first time, also racing one of the potent GSX-R1000 bikes.

Whakatane's Damon Rees will make a welcome return to New Zealand after a successful 2020 season spent racing the British Superbike Championships in the superstock class.

If his family pedigree, his early season form in New Zealand this year and his front-running antics in the UK are to be acknowledged, then he'll be among the favourites to win.

Damon's elder brother, Mitch Rees, and their father, Tony Rees – the multi-time national superbike champion who was Suzuki International Series champion in 2016 – are also entered for 2020 and that will stir up the action even further.

Willacy says that "with riders unable to race as much this COVID-affected season as much as they'd have liked, they'll be tearing their hair out to get going" and this means the racing will be twice as intense.

As always, the third and final round of the series, on the public streets of Whanganui's world-renowned Cemetery Circuit on Boxing Day, will bring fans the excitement and closeness that only street racing can deliver.

The 1.6km course comprises eight corners, a railway crossing, an over-bridge and blind s-bends, flanked either side by headstones.

This is a venue unrivalled almost anywhere in the world, a place where more than 10,000 spectators cram every nook and cranny as bikes race past almost within touching distance. Riders can't believe it and spectators love it.

You have to be there on Boxing Day to see who takes out the series overall and, of course, to witness who claims the most sought-after, one-off Robert Holden Feature race trophy.