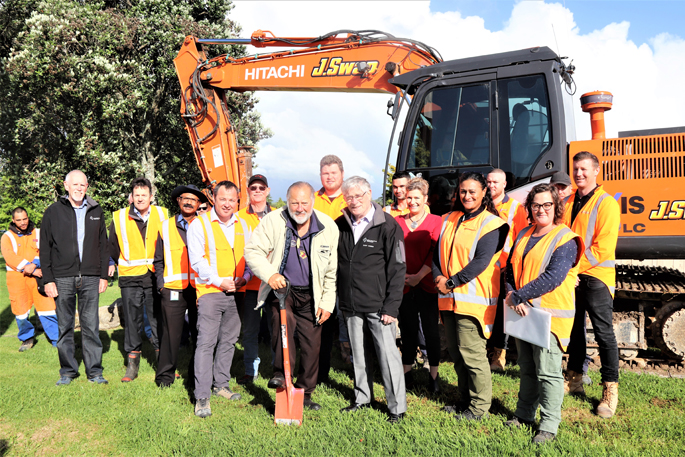 A blessing and sod turning in Omokoroa this morning heralded the start of construction of the Omokoroa Road urbanisation, from Western Avenue to Tralee Street.

The Omokoroa Road Urbanisation (Western to Tralee) is the first of the five projects planned to be completed in Omokoroa over the next two years.

The total projects are estimated to cost $50 million of which $14million is co-funded by the Government under the Crown Infrastructure Partnership (CIP) programme.

Mayor Garry says project is expected to be delivered over the 2020/2022 construction seasons, with completion estimated to be by June 2022.

“We are pleased to have J Swap Contractors doing the work as they have come to know the Omokoroa community from previous contracts – and the community also has a high level of comfort with the Swap team,” says Webber.

“We ask the community to be patient during the construction phase – there will be disruption to traffic flows – but the entire project will be carefully managed to keep impacts to a minimum.”

There will be roundabouts at Tralee Street and at McKenna Lane, plus improved entrances to Fresh Choice supermarket and the commercial shopping area. Utilities services will be partially undergrounded.

The project is part of a series of Council infrastructure developments across the Omokoroa Peninsula to cater for subdivision and population growth through to 2022.

Combined, these projects are the result of sound planning work and reflect the spatial planning that will support all land use development in Omokoroa in years to come. Council estimates that by 2060, the Omokoroa Peninsula will be fully developed and home to an estimated 12,000 residents

...if work could start without a need for spiritual propitiation, as if we still live in the Middle Ages, but, I also recognize it is important to many people and I respect their beliefs, even if I don’t share them. Besides, I cannot argue that a Blessing does any harm... :-) Good to see the road being upgraded.