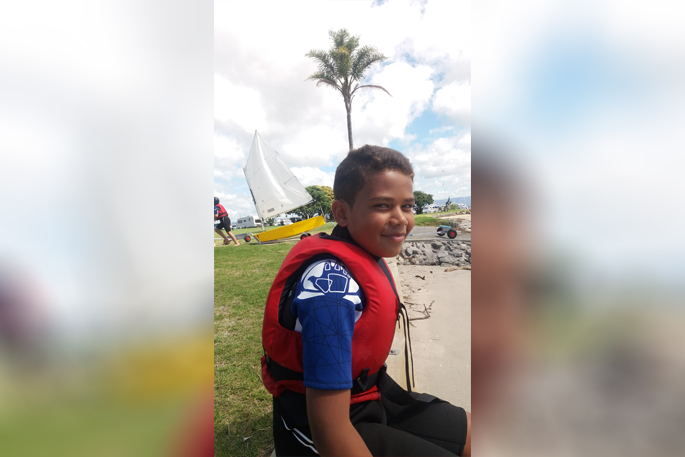 There's nothing quite like being out on the open water, enjoying the freedom and speed of sailing. It not only requires technical skills and expertise, but discipline, self-confidence, and fitness.

But it's a sport that can seem out of reach to many in the region, particularly for young people, with equipment, coaching and club costs quickly adding up.

These costs, along with the general cost of living and the demands on parents' time, make it difficult for many families to get into sailing.

Local charity Bay of Plenty Sailing Academy Trust (BoPSAT) aims to provide the opportunity for youth to experience the sport of sailing, irrespective of means or ability.

They do this through making sailing gear available at a low cost, and through targeted support programmes for sailors.

14-year-old Noah Kota joined BoPSAT four years ago when he was offered the chance to join their Sponsored School Programme.

The programme takes children hand-picked by the principals of four local primary schools through free sailing courses. It teaches the basics of dingy sailing; sailing upwind, sailing downwind, reaching, going about and gybing, basic knots, water safety, and importantly, how to have fun safely on the water.

After going through many big life changes, including the separation of his parents, the opportunity provided Noah something positive he could have for himself.

Noah's mother Dawn Winters says while he appreciated the experience, sailing is not a cheap sport, and the cost was beyond what she could afford as a single parent, after the programme finished.

"But in 2018 when Noah was in Year 7, I received a call offering Noah a BoPSAT sailing scholarship as he was someone who had stood out to the sailing coach; they provide the boat, and a sponsor helps pay for sailing lessons, club fees and other expenses."

BoPSAT supports around three children a year through this Sponsored Sailor Programme – helping those who show interest and potential in the school programme reach the next level. Each sponsored sailor is linked with an individual sponsor.

Noah has progressed through BoPSAT's fleet of boats since joining the programme.

"He started training in an Optimist and competed in the AIMS games that year, then moved onto an O'pen Bic in 2019. He competed in the O'pen Skiff Nationals in January 2020 and took home the trophy for OPen Bic class of the Tauranga Yacht club summer series 2019-2020. He has raced the winter series and the current summer series in a 420 which is a two-person boat."

"All the sailors at the club are encouraging and supportive of each other. The competitive side of the sport is about improving your skills and tactics, and that is done by training together. It has developed a great camaraderie among those who have been sailing and training together.

"Noah loves sailing and has definitely found a passion in the sport. He is very keen to start crewing on a keeler boat, and we are aiming to have him racing in a laser in 2021. Noah's dreams are of racing in the America's Cup, Volvo Ocean Race and the Olympics. We are so grateful to BoPSAT for opening up this world of opportunity for Noah."

BoPSAT funds their initiatives through their charter fleet of 40 boats and windsurfing boards. The fleet is used by sailing clubs for running courses, and by local high schools for running school sailing teams.

"The effect of sailing on lives, whether a child or adult, is the same. The freedom of sailing and using the power of nature to power your vessel, the independence of being in command of your destiny is empowering.

"The children who take part in the sponsored school programme and sponsored sailor programme have not previously had the opportunity to experience sailing. In fact, most have never had anyone believe in them enough to trust them with expensive equipment and train them in how to use it. They have to learn independence and to trust their own judgement. There is no-one else in the boat - they are the captain."

TECT has supported the charity since 2009, with funding for boats and equipment totalling over $125,000 over the years.

Last year, $5,000 in TECT funding went towards beach trolleys, sails and a road trailer for transporting boats to regattas.

Roger says without TECT's funding, Bay of Plenty Sailing Academy would not have been able to build up its fleet of Optimists, Windsurfers, Bic O'pen Skiffs and 420 sailing dinghies.

"Through the provision of low-cost charters, we are able to fund the school learn to sail programme. The more boats we can charter the more schools we can sponsor.

"TECT's most recent funding has allowed us to maintain our equipment which is a large part of boat ownership. Whilst we have a few volunteers who assist with boat maintenance, metal trailers and sails have a finite life. Our old beach trollies were galvanized steel which ultimately rusted. They have now been replaced with low maintenance alloy trollies. Sails wear out like a pair of baggy pants that have been patched too many times, so we are pleased to have new sails thanks to TECT.

"The road trailer purchased also allows 420 crews and their parents to only make one trip to a regatta rather than multiple trips to get the boats to the regatta. This makes the logistics much easier to manage for the schools."

"The opportunity to learn how to sail opens up a world of possibilities for these children. Whether it's enjoying recreational sailing around our beautiful coastline, or even taking part in the Olympics or Americas Cup, Bay of Plenty Sailing Academy is creating pathways to engage young people in the sport of sailing for a lifetime.

"The charity's equipment is also used by the Tauranga Yacht and Power Boat Club for Learn to Sail Classes, and by many schools in the region for their team racing. It's an incredible community asset we are proud to support."