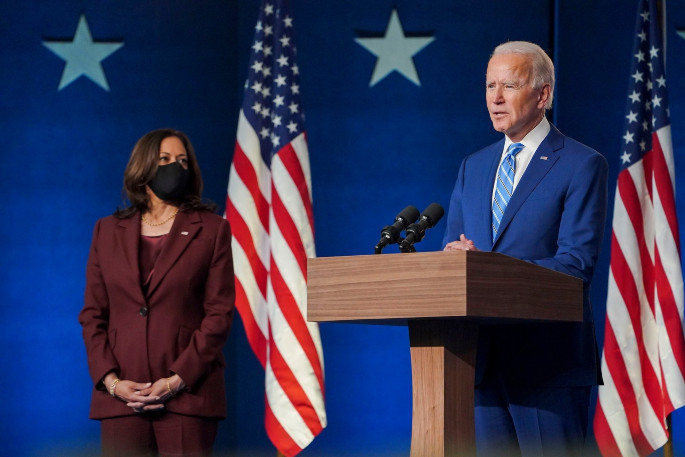 Prime Minister Jacinda Ardern has congratulated President-elect Joe Biden and Kamala Harris on their victory in the US Presidential election.

“The relationship between our two countries is strong, and I look forward to developing even closer relations with the incoming Biden Administration,” says Ardern.

Democratic presidential candidate Joe Biden has won the US election, wrestling power away from Donald Trump, according to major news media outlets.

Three days after polls closed, Biden has now won more than the 270 he needs to secure the presidency.

The former vice president's projected win in Pennsylvania takes him to 273 electoral votes.

“As Vice President, Joe Biden was a close friend of New Zealand and visited here in 2016, the most senior US politician to do so since President Bill Clinton attended APEC in 1999," says Adern.

“New Zealand will continue to work side-by-side with the United States on the issues that matter to both of us, including the prosperity, security, and sustainability in the Indo-Pacific and Pacific Island regions.

“The campaign by the President-elect has also shown the shared interests we have in addressing global challenges like Covid-19 and climate change," says Adern.

“There are many challenges in front of the international community right now, the message of unity from Joe Biden positions us well to take those challenges on.”

“New Zealand has enjoyed positive and cooperative relations with the United States over the period of the Trump Administration, especially in the Indo-Pacific and Pacific Island regions,” says Ardern.

Biden said he is honoured that Americans have chosen him to lead the country.

Biden said on Twitter that the work ahead is hard, but he promises to be a president for all Americans.

At the age of 77, Joe Biden will be the oldest president in American history. His running mate, Kamala Harris, will be the first ever female vice-president.

Trump has continued his attacks on the validity of the results. His campaign is pursuing a series of lawsuits across battleground states, but legal experts said they were unlikely to change the election outcome.

The US Senate looks likely to be dominated by Republicans.

Reuters commentator Andy Sullivan said a divided Congress could prevent Biden from enacting major priorities, such as expanding healthcare, fighting climate change and providing aid to millions whose lives have been upended by the coronavirus.

Biden has said on his first day in the White House, he would issue a national strategy to respond to Covid-19 that would probably include a mask mandate and clearer guidance on testing and school reopenings.

He has also promised to work more productively with health officials that Trump ignored, such as the nation's top infectious-disease expert, Dr Anthony Fauci.

However, Biden might not be able to achieve all that he wanted with a Republican majority in the Senate, Finny said.

Biden had supported the Comprehensive and Progressive Agreement for Trans-Pacific Partnership (CPTPP), but it was uncertain whether he could get his party to agree to the US joining the trade agreement with New Zealand and other nations.

"He would be much more likely to join this agreement than a second Trump presidency," says Finny.

Victoria University professor of strategic studies Robert Ayson said the Biden administration would change the US "tone" towards international institutions.

"New Zealand will find in America a partner that is much closer on supporting multilateralism," says Ayson.

"Even though Mr Biden will want to take the US back into the Paris Climate Change Accord, he's going to need the Republicans if he wants to spend some big money on climate change mitigation.

"That's going to be the big issue."