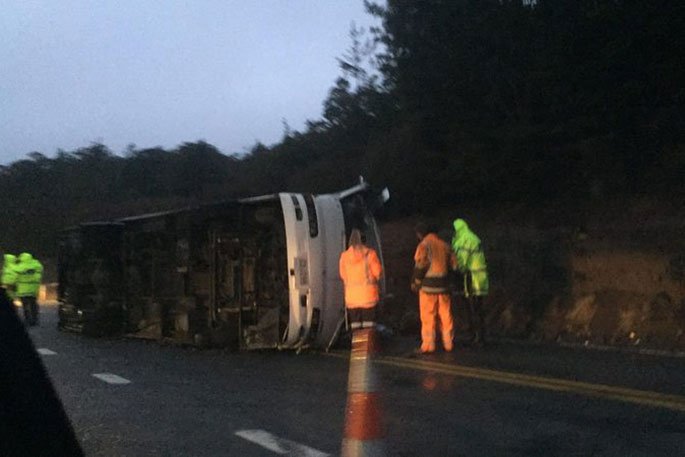 The driver of a bus which crashed and killed an 11-year-old girl has admitted to falsifying information and changing his story about how he was driving.

Hannah Francis died in July 2018 and 18 others were injured, after the brakes failed on a skifield bus operated by Ruapehu Alpine Lifts.

It careered down the mountain road without brakes at about 70 km/h, crashed into a bank and rolled onto its side during its descent from the Tūroa skifield.

The driver - who can't be named - was under questioning during the second day of the inquest into Francis' death in Auckland.

The way he used the brakes on the bus came under intense scrutiny. The driver has said the brakes were working at the start of the trip and then all of a sudden failed, without an obvious reason.

A lawyer for vehicle inspection company VTNZ, Alastair Darroch, asked him about the possible explanation for the brakes failing.

"One of the situations where brake fade can occur is going down a long, steep hill. Do you agree that it's possible that you overused the brakes?"

"No," came the reply from the driver.

Darroch presented evidence that a number of people smelled burning brakes before the crash. This included a mechanic on board, and a man who was following directly behind the bus in a car.

"A number of other [bus] passengers had also noticed the smell of brakes. I'll put it to you again: do you accept it's possible that you overused the brakes on the way down?" Darroch said. The driver replied again: "No".

Crown lawyer David Boldt suggested the driver was using a gear that was too high for a long and steep descent.

Boldt said the driver had a heavy, full bus, and being in a high gear meant he relied on his footbrakes to slow the bus down, which caused them to fail.

The driver initially told police that he was in third gear at a certain point of the road, which was a higher gear than recommended.

But during the inquest he said he was in second gear, which would have been appropriate. He rejected the suggestions he had changed his story to benefit himself.

"Why did you tell the detective you were in third [gear] if you weren't?" Boldt said. "I can't remember," the driver said.

The driver outlined his 15 years of experience driving buses including in mountainous conditions, and working the previous winter at Ruapehu.

He said he had driven the Ōhakune Mountain Road around 500 times in the last two winter seasons.

He had completed training at Ruapehu in 2017, but in 2018 - the year of the accident - he had to do a refresher course, but had not yet done it.

Police lawyer Chris Wilkinson-Smith questioned the driver about the paperwork he had signed in 2018 which said he had completed all training competencies, when in reality he had not.

"So this two page document is just all lies, isn't it?" Wilkinson-Smith said. "Correct" the driver replied.

"And you made that false document the day before the crash?" "Yes," the driver said.

Boldt pressed the point, questioning whether the man was able to be relied on to be truthful about his actions.

"You admitted you had lied to the police, but are you asking Her Honour to accept that you are not lying to this court to protect yourself?"

"Telling you the truth. That's the truth," the driver said.

The driver maintains that he was in the correct gear, not overusing the brakes, and they failed out of nowhere.

The inquest before Coroner Brigitte Windley continues in its third day on Thursday.

... when they fear the consequences. There are only 2 possibilities: he’s telling the truth or he’s lying. Each of us will make an assessment, given the evidence that corroborates either POV. Either way (and it is the Judge’s assessment that matters here), this is a tragedy. The best we can hope for is that the procedures for checking driver qualifications get tightened up.