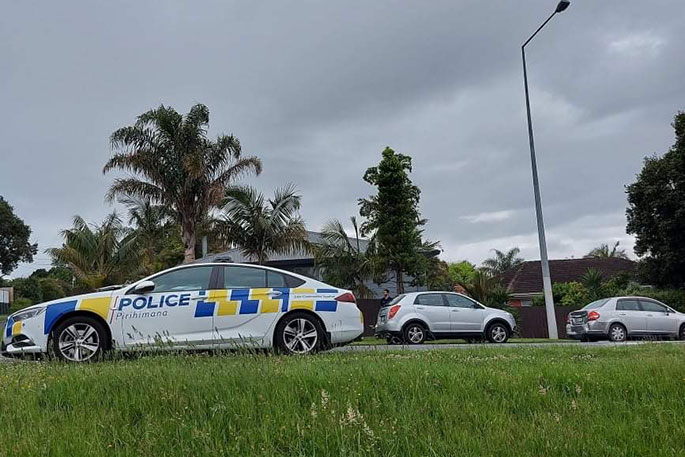 Police are speaking with those involved in the crash. Supplied photo.

Traffic may be delayed in the Judea area, following a three car crash on Waihi Road.

A SunLive reader has emailed photos of the crash, which appears to be near Judea Road.

"There are bumper to bumper traffic levels now.

"The police car in the photo is obscuring the third vehicle."

Police are working to clear the scene as soon as possible.

This is the second crash to be reported in the Tauranga/Western Bay area today.

Earlier, police were called to a two vehicle crash on SH2 that was reportedly blocking one lane.

A police spokesperson says the highway is now clear.

Ah yes... phones. Sorry about late reply Yadick. Dropped my spliff while reading your commment and had to pull over to put the fire out. To use a phone while driving make sure your elbow is on top of the door panel hard against the glass and your hand is splayed as wide as possible to the right side of your face. This gives the impression, should anyone be watching, that you have had a hard day at the office and you are just resting your head. Works everytime. Good thing youre not really tired as that would be dangerous. At night, turn the backlight on the phone off otherwise you will look like a bad impression of Herman Munster

I cannot believe you wrote that and forgot about mobile phones. Well done Justin and SO true. Sadly funny but very truthful.

Thank you for your kind words dumbkof2. As as gesture of appreciation I can let you in on a couple of driving tips. When driving through double lane roundabouts one can save on tire wear by crossing from the outer lane to the inner lane and back to the outer lane. This also improves passenger comfort. The manouver can be actioned as long as the nose of the vehicle is ahead of the other car (race circuit etiquette) wouldn’t want to upset anybody. To have a safe long open road trip, travel 10 to 15kph under the speed limit; the road in front of you will eventually clear of all that annoying traffic and one can enjoy a relaxing scenic journey. During this time under no circumstances whosoever look in the rear view mirror.

Can’t blame Tourists for the leap in crashes we have experienced lately. Time to take ownership of your stupidity my fellow Kiwis. We don’t give a toss about the Road Code. Indicators only need to be used if we think we are personally in danger (bugger anybody else), Stop Signs are just a suggestion, Amber traffic lights mean put your foot down or you won’t make it through in time, Red traffic lights tell us we were too slow on the Amber. Whats infront of me, behind me, to the left or to the right only matters if its a Police car and that is when, for some strange reason, is when I am able to recall the Road Code rules.

yes keep as fast and as close as you can. panelbeaters need the work

Drive as closely as possible to the car in front. It makes them go quicker.