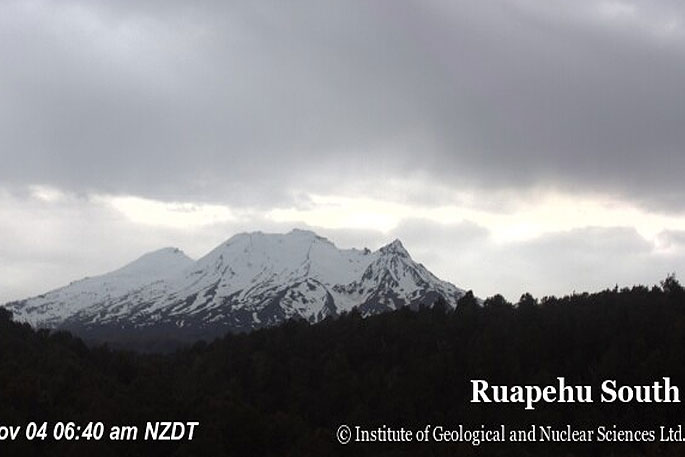 About three weeks ago, it was sitting at 15°C but GeoNet reports it is now at 22 °C.

The volcano's alert level remains at 1.

"In late September the lake had cooled to around 12 °C marking the low point of the cycle. Since mid-October the lake has been warming slowly and has now reached 22 °C. The lake is overflowing via the outlet."

Brad says these are normal observations for the start of a heating cycle.

"Chemical analysis of lake water collected on October 9 showed no significant changes in the makeup of the lake waters, since the previous sample was collected on August 9.

"Other key chemical indicators such as the respective water concentrations in Mg (magnesium) and Cl (chloride) can be used to track whether the uprising fluids travel through new fractures or in the proximity of magma.

"These indicators have not varied significantly in the last 4-5 years. In other words, the lake water chemistry has largely remained chemically similar throughout this period.

Brad says the intensity of volcanic tremor has remained weak over the past three months, and small earthquakes continue to be located in the vicinity of Mt Ruapehu.

"None of these observations are unusual for Mt Ruapehu. All observations over the past months indicate that the volcano remains in a general state of minor unrest.

"Mt Ruapehu is an active volcano and has the potential to erupt with little or no warning when in a state of volcanic unrest. There is no change in the Aviation Colour Code and it remains at Green.

"GNS Science and the National Geohazards Monitoring Centre continue to closely monitor volcanic activity at Mt Ruapehu with the GeoNet network of seismic and acoustic sensors, GPS receivers, sensors in the lake and visits to the lake area, and flights to collect and analyse volcanic gases."