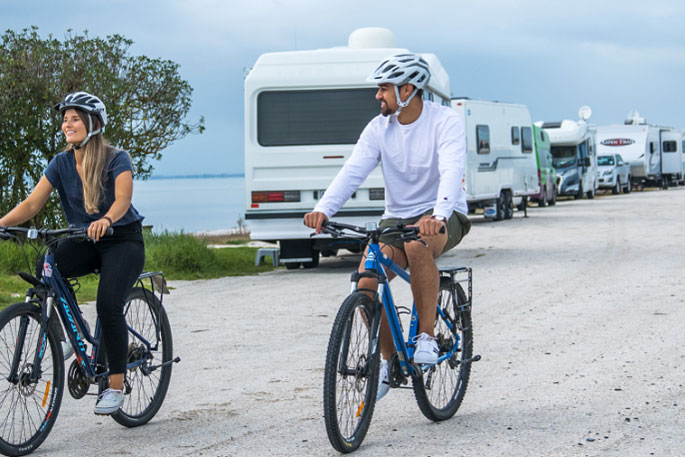 Freedom campers now have even more places to stay in the Hauraki District. Please see below and attached, a media release advising of new freedom camping locations in Waihi and Kaiaua. Supplied photo.

Hauraki District Council has adopted changes to its freedom camping bylaw, meaning there are now more places to freedom camp in the area.

If you’ve been singing “I want to break free” lately, and craving some domestic travel in a self-contained vehicle, you’re in luck, says Hauraki District Mayor Toby Adams.

There are now even more places to freedom camp in the Hauraki district.

Hauraki District Council adopted the proposed changes to its Responsible Freedom Camping Bylaw on 1September 16, after considering written and verbal feedback from its communities.

“These changes are very timely as we gear up to welcome more domestic visitors to our stunning and diverse district.

“We’re pleased to add two more locations in the historic mining town of Waihi, and one more, which is currently under construction, just north of Kaiaua, at the start of the Hauraki Rail Trail."

Freedom campers can now stay in Waihi at a council carpark, which is accessed from either Mueller or Haszard Street and there are also some limited spaces for larger self-contained vehicles at council’s Morgan Park car park, off Kenny Street.

The Wharekawa Coast is another location sought after by responsible freedom campers and rail trail enthusiasts.

“We can’t decide if Kaiaua is the beginning or the end of the Hauraki Rail Trail, but we are sure that it’s a fantastic destination to start or end your ride.

"We’ve started the construction of a new council carpark and freedom camping area, including a new four-unit toilet block and when finished, it will have room for up to 20 vehicles."

While it’s under construction, self-contained vehicles can use the site and portaloos will be in place by the time the busy summer months kick in.

Just south of Kaiaua, the increasingly popular Rays Rest, with great fishing and uninterrupted views across the Firth of Thames, has room for up to 80 self-contained vehicles.

In addition to the new sites, there are also a couple of sites where camping is no longer allowed. Because of its cultural value to iwi, Tauwhare Koiora, Kaiaua (the area around the boat club, also known as Swing Bridge Reserve) is out of bounds for freedom campers.

Council land (reserves and road reserves) along East Coast Road on the Wharekawa Coast, (except for the official sites at Rays Rest and at the start of the Hauraki Rail Trail), are also no camping zones.

A maximum two-night stay in a calendar month still applies for all designated responsible freedom camping locations, to give fair access to everyone.

“We’re just a hop, skip and jump away from city life, but we’re a world away in terms of relaxation and adventure. Come and experience the Hauraki way of life in our motor home friendly district," says Adams.

Visit https://www.hauraki-dc.govt.nz/our-district/freedom-camp/ for a full list of freedom camping sites and requirements.