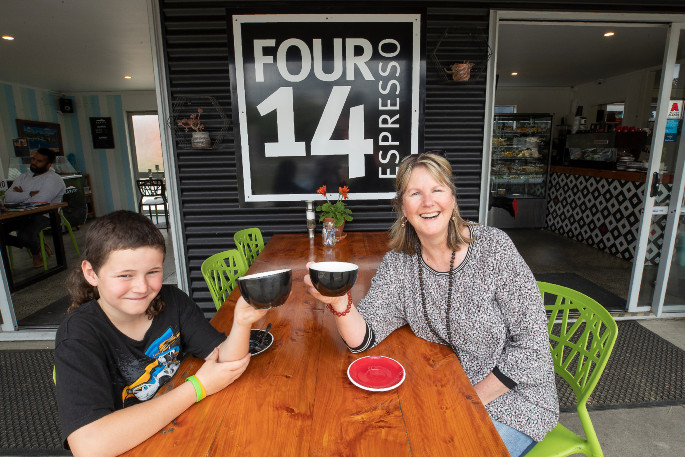 A Pyes Pa school student hopes his chocolate fish fundraiser will help people learn about cystic fibrosis, a condition he has lived with his whole life.

Charlie Ford, 10, isn’t worried at all about people knowing he has the condition and has already done a school project to help make other children aware of it.

He has such a great attitude, his proud mum Kim says.

“I’m different and I like being different,” says Charlie.

The pair approached Michelle Boyce, owner of Four14 Espresso café – down the road from their home – to ask for her help.

“She’s such a lovely lady and she really likes to support local,” says Kim.

Michelle is happy for Charlie to sell boxes of chocolate fish through the café and is displaying them along with a little blurb about the disease.

The response from café patrons was amazing, Kim says.

“We’ve been really surprised at how generous people have been.”

Boxes were also set up at Charlie’s school and at some of Kim’s friends’ workplaces.

A boxful of chocolate fish usually brings in $50 of fundraising but Kim says people are paying much more than expected per fish.

“Everyone we have approached has just been really understanding and helpful,” says Kim.

Charlie has also spent time selling the fish with his Nan, Heather Hutchins in Papamoa, at the local mall.

They ran out of fish and people wanted them on back order, Kim says.

Charlie wants to keep going with the cystic fibrosis fundraising and is planning a stall outside his Aunty’s house on Papamoa Beach Road next.

“I hope more people will learn about it,” says Charlie.

He has a big ‘thank you’ to the people who have bought fish and made donations so far.

“We are still selling more and they are yummy as!”