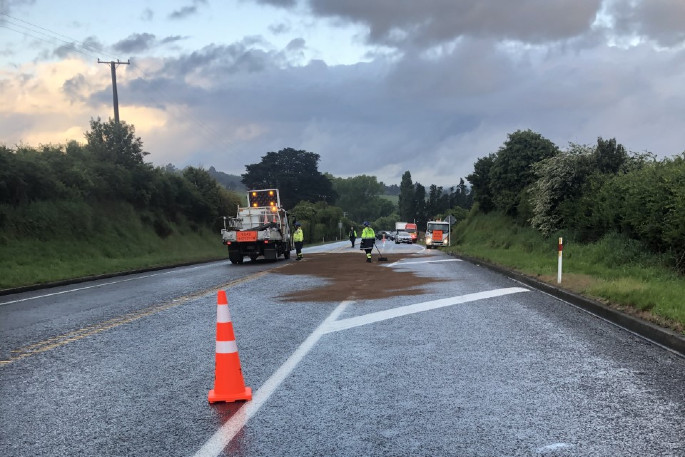 Sand has been used to cover oil spilled in the two crashes. Photo: Charlotte Drabble

8.30pm State Highway 29 over the Kaimai Range has reopened following a two-car crash on the Tauranga side of the range.

The two-car crash happened just before 6pm near Kaimai School.

One person reportedly suffered moderate injuries in the crash while another person received minor injuries.

A stretch of SH29 was closed for about two hours as contractors cleaned oil off the road.

NZTA advise that the oil spilled from the crashes has now been dealt with and a 50 km per hour temporary speed limit is in place.

Motorists are advised to take extra care as there may be slippery surfaces in certain areas.

6.38pm Two crashes on SH29 have resulted in the highway being closed until spilled oil has been cleared up.

Traffic is building up between Tauranga and the Waikato. The highway is expected to be closed for up to two hours.

"One person is reported to have moderate injuries and one person has minor injuries," says a Police spokesperson.

Police advise that another collision happened, also at 5.55pm, about half a kilometre below the summit on the Waikato side of the Kaimai Range.

"A car is reported to have collided with the back of a truck," says a Police spokesperson.

"Fortunately there don't appear to have been any injuries."

Both crashes resulted in oil spillage.

"District Command Centre has just advised the road will actually be closed for some time yet as there is oil on the road at the crash near Kaimai School as well, which needs to be cleaned up," says a Police spokesperson.

SunLive will continue to update as more information comes to hand.

Police advise that they were alerted to a two-car crash on SH29 near the Kaimai School at 5.55pm.

"One person is reported to have moderate injuries and one person has minor injuries," says a Police spokesperson.

"The northbound lane was blocked by the crash but tow trucks have been organised, so it should be clear soon, if it's not already."

However NZTA advise that due to the crash this section of highway is still partially blocked.

"Expect delays until the scene is cleared," says an NZTA spokesperson.

It is unknown if there are any injuries at the scene of the crash on the Waikato side of the Kaimai Range.

Motorists are advised to take extra care with the wet conditions and lowered visibility over the Kaimai Range.

SunLive will update this as more information becomes available.