Taking the region from A to B 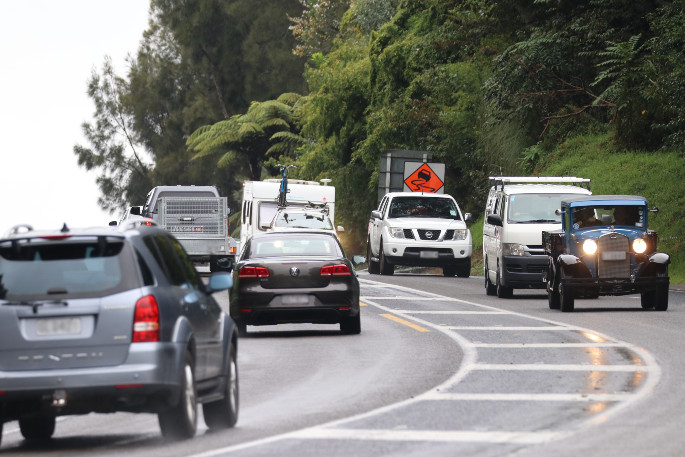 Getting around the Western Bay of Plenty is becoming increasingly difficult. Photo: Daniel Hines.

Local authorities in the Western Bay of Plenty have released a sweeping plan for the future of transport in the region.

The plan for transport investment and changing the way people move around the Western Bay of Plenty, was revealed at SmartGrowth last week.

Over the next 30 years there will be improvements to bus services and routes, new cycling and walking routes, a shift from road to rail for freight and upgrades of key road corridors to cater for a growing population.

The united approach to improving the Western Bay’s transport system is being led by an independent team on behalf of local partner councils and transport organisations.

“The transport system in Tauranga is under pressure from increased demand for travel.  This has arisen from under-investment, a steadily increasing population and lack of feasible transport choices.

He says the plan is focussed on generating a noticeable shift from cars onto public transport, improving safety, providing reliable travel times including freight journeys, and creating better walking and cycling connections.

Huge growth projections and the scale of investment required means it will take a “considerable amount of time” to address the transport system.

“There are no quick fixes and the next few years will focus on delivery of already committed significant transport investments, including major public transport and mode shift initiatives. Planning, business cases and design for the next generation of major investments and larger projects is also expected to commence.”

Funding has yet to be determined and the recommended programme of investment will be considered by elected members of the various councils for inclusion in a joint submission to the Regional Land Transport Plan later this month.

Some of the proposed investments include short term enhancements of the bus service and infrastructure that gives priority to public transport, continuing the development of safe and accessible walking and cycling routes and implementing works to unlock growth in Papamoa East and the Western Corridor.

At the same time, planning for future, larger investments is proposed to look at the best ways to tackle current and future constraints on the transport system including Hewletts Road and access to the Port of Tauranga. It will also look at improvements on 15th Avenue and Turret Road, and longer-term improvements on SH29 to support growth in Tauriko West.

A public transport business case would look at how more frequent and reliable bus services can get more people using buses in the medium and long term and take pressure off the already strained transport system. This would include park and ride facilities, transport hubs as well as network improvements and potentially new infrastructure with public transport priority.

These new activities are in addition to the $1.2 billion of committed transport investment in the Western Bay over the next eight years which includes Takitimu North Link, Cameron Road Multi Modal Upgrade, Omokoroa Road Urban Upgrade, and Rangiuru Business Park.

Too much focus on things that might work. We have installed bike lanes that no one uses. Why not push for decent roads between cities.

They supposedly did that before the "upgrade" of highway 33 between Rotorua and Paengaroa. As a regular commuter on this road for the last 15 years, the drive is the worst now it’s ever been. We submitted in the "consultation" that if the road was actually regularly policed to reduce speed (hardly ever see police), take unroadworthy cars (and drivers) off the road, that would help. Better to pay for additional police patrols than spend millions on tweaking with speed limits, and working on the same bits of road over and over again. Driver behaviour has got a lot worse over the years, police that instead.

So buses and bike lanes take the money available while terrible intersections get sod all. SH 29 and Cambridge road ,how about a tunnel at Barkes corner ..no money for a real project ! Bet there are hundreds of poor intersections and highway improvements that readers can bring up

All you need to know about road layout planning is embodied in Greerton. Traffic backing up, slow traffic, bike lanes that don’t help anyone it’s quicker for a cyclist to walk through and safer as the roundabouts are dangerous . No trial of layout so that’s what you get. Failure !