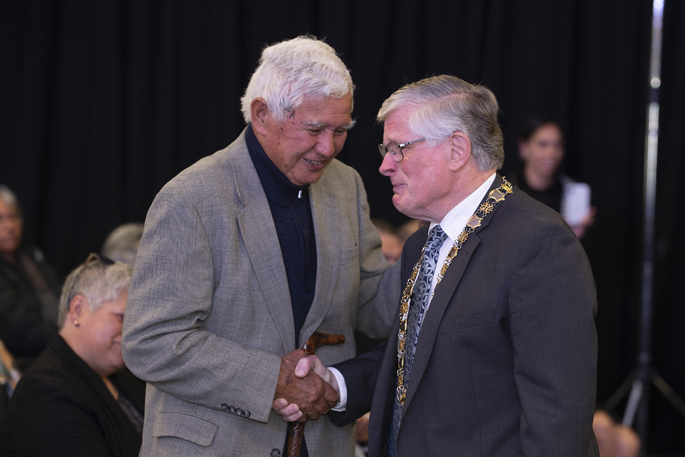 Western Bay of Plenty District Council has agreed to return ownership of the eastern end of Matakana Island to its ancestral owners.

In a landmark decision at today’s extraordinary meeting of Council at Trustpower Baypark, Council voted unanimously in favour to return the 172 hectares of land, commonly known as Panepane Purakau, to the five local hapū.

All elected members except Christina Humphreys were present.

In front of more than 300 people, and livestreamed via Council’s Facebook page, the decision was met with tears of joy, cheering and waiata from those in attendance.

Council inherited the land at no cost from the Tauranga Harbour Board under the Local Government reorganisation in 1989.

Western Bay Mayor Garry Webber says this is a historic moment in council’s history and says returning the land to its ancestral ownership is the ‘right thing to do’.

“This has been a long and often fraught process, but with 7121 submissions out of a total of 7381 in favour of the land’s return, today’s decision shows that open minds and a will to find solutions is the way to achieve the best outcome for everyone,” says Garry.

“The return of Panepane Purakau is very important to the people of Matakana Island and I thank the hapū for their help in achieving today’s outcome.

“We are hopeful the transfer goes a long way to mending the significant hurt the hapū faced when their land was taken by the Crown under the Public Works Act in 1923.

“We are confident the agreement will achieve great outcomes for tangata whenua and the wider community while allowing us to move forward together.”

The five hapū that connect to Matakana Island are part of Ngai te Rangi Iwi and include Ngai Tuwhiwhia, Ngati Tauaiti, Te Ngare, Te Whānau a Tauwhao and Ngai Tamawhariua.

Ngai te Rangi Iwi kaumatua Hauata Palmer says it is an historic day for the hapū and comes after several years’ negotiating with Council for the return of ownership.

“This is a great result for our whole community brought about by many people in different places doing extraordinary work. This hasn’t been easy, but nothing worthwhile comes about without hard work, unwavering focus and perseverance.

“We had a vision to right the wrong done several decades ago. That vision is on its way to being fulfilled. We are grateful for the leadership exhibited by Mayor Garry Webber. He could see the bigger picture all the way along. We are also grateful to all the councillors. Such decisions require great care. We appreciate the careful consideration given.

“We extend the hand of friendship to those in our community who were opposed to this land coming back to us. We understand that feeling of deep connection with land and home.”

Under the transfer agreement a seven hectare public reserve will be created to ensure public access to the foreshore is protected in perpetuity and an esplanade strip will follow the coast to the ocean side.

This means the public will still be able to fish off the wharf, walk along the beach and use the recreational areas such as water-skiing lanes.

Port of Tauranga navigation aids will remain in the same location and the land will be forested.

Work will now begin on implementing the Council’s decision, including completing the accretion claim and providing the space for tikanga based kōrero between the five hapū and the descendant owners group.

This will then be followed by an application to the Māori Land Court to determine the receiving entity.

All for returning land that was confiscated. Would hope Ōpōtiki District Council could show leadership down the East Coast. They are trying to return land to the iwi that was sold for profit by an iwi member in the 50’s. Big difference in returning confiscated land as opposed to land the was sold by free will and profit.