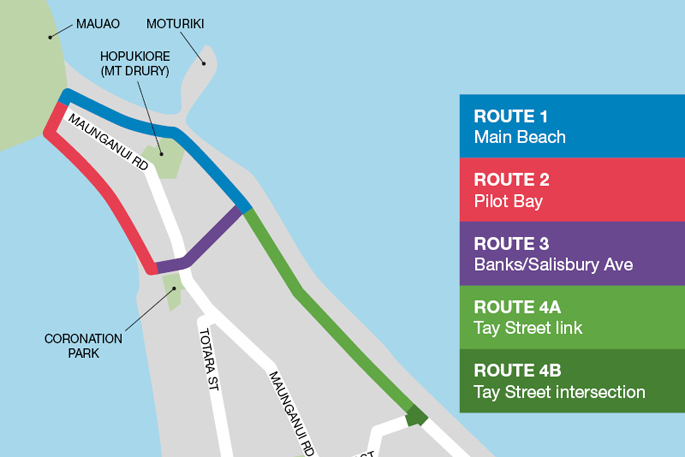 Tauranga City Council says community feedback on the innovative streets project planned for the north Mount Maunganui area shows there is support for trialling temporary changes on some of the busiest streets.

The aim of the ‘Innovating Streets at The Mount’ project is to make highly-used streets safer and more enjoyable for all users, says a statement released from the city council.

In August and September, council undertook a survey asking for thoughts and ideas about temporary changes which could be tested on four popular routes: Banks/Salisbury Avenue, Pilot Bay, Main Beach (from the corner of Adams Avenue to Banks Avenue) and Tay Street Link (between Banks Avenue and Tay Street).

A total of 1236 responses were received, providing insights from residents, business owners and visitors.

The survey findings indicated that the majority of the respondents want to trial changes; with support varying between 58 and 70 per cent, depending on the route.

Council says other key survey outcomes were that respondents think all the proposed routes are safer for pedestrians than for people on bikes, scooters, skateboards or other mobility-aid devices. 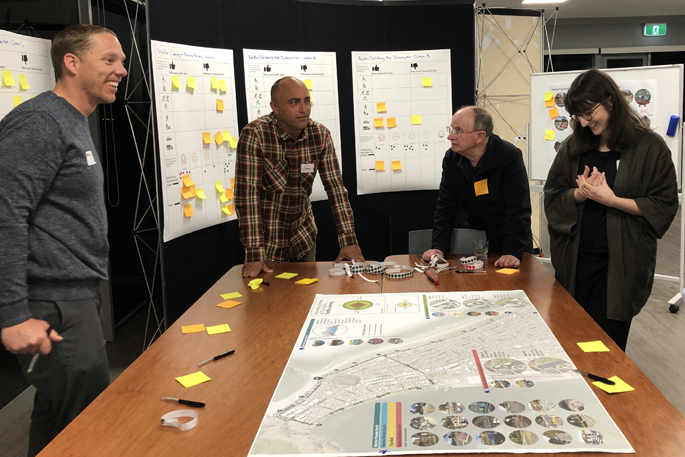 “Between 46 per cent and 66 per cent of respondents think the routes are not safe for children on bikes, scooters, skateboards or other mobility-aid devices. The statistics for adults are similar (within five per cent).

“Feedback statistics for respondents who identified themselves as ‘Mount residents’ were similar to those for all respondents (typically within five per cent).”

Council says the survey feedback has been key in guiding the next step in the project, which has seen the recently formed Community Design Group, consisting of community representatives, work closely with council staff and consultant designers to develop improvement options for the potential routes.

“That work is expected to be completed before the end of this month. In November, council will seek the community’s views on the designs they want to see trialled, through a further round of public consultation.

“In February 2021, the mayor and councillors will consider the final design options and approve those they think should be piloted.

“The community will then be able to experience the pilots on the ground and provide further feedback about how they are working, from their perspectives.”
Next steps

November 2020
Round two of community feedback: share design options and find out what the community thinks.

December 2020
Finalise a design with the Community Design Group for each route that the community wants to see trialled.

February 2021
Seek approval for trials from mayor and councillors.

March 2021
Set-up and implement any trials approved by the mayor and councillors. Public get to experience on-the-ground changes through the pilot phase.

All applicants were sorted into different categories (e.g. youth, resident, parent, business owner), to ensure that the various community sectors and views are represented, with a police representative undertaking multiple random draws to determine the group members.
Funding
The Mount trial is being supported through Waka Kotahi NZ Transport Agency’s Innovating Streets pilot fund. $990,000 (ex GST) has been set aside for the project, of which Waka Kotahi is funding 90 per cent and Tauranga City Council 10 per cent.
To find out more about the project, view the full feedback report and sign up to receive updates, see www.tauranga.govt.nz/innovatingstreets.

The survey questions were well put together 1. Do you support the trial 2 Do you ride a bike ? 3 would you ride a bike if it was safer ? Got better 4 do you own a business in the mount ? Do you live in the mount ? Do you visit the mount ? Are you a student . Attending the workshop was even better . Put your ideas down on a sticky and put them on the road in question . The saving grace in all this is TCC will burn all the cash on advertising , consultants and sticky’s and none of these hairbrained ideas will go ahead . Monet best spent on other issues such as Greerton , ocean beach rd just to name two . Come along to a workshop and bring your sticky’s.

At least a trial

Well it at least gets a trial first Greerton didn’t because council knew best . The Greerton fiasco was set in concrete without and trial to see if it would work and continues to cause long queues longer times to get through than ever before. Huge disruption and cost that has made everything worse. Traffic taking to side roads to try get round, shopping more difficult. No way it will change now , hopeless.

"the majority" was for this trial. TCC have proven themselves to be masters of writing questionnaires in such a way that the answer they want is the one they get.

@Equality, did you actually read the article? They are going ahead, based on the positive feedback. If there are majority against it, then why didn’t they provide feedback.

This so called survey only called for comments from Mt residents that lived north of Tweed street,not from all Mt residents,obviously to get the results that they wanted.I phoned the council at the time to voice my complaint only to be told it was too late to change it. This council is well known at jacking up their surveys to get what they want,changing the road layouts will not make them safer,simply because of the increasing amount of people using them.

Finally common sense has prevailed, this area should be being active and safe and for families and picnics not carparks. Well done council.

The busiest beach in NZ and the Tauranga city council keep giving us drivers less lanes and roads particularly round the mount. There is 20 kilometres of beach front along the mount, use more of that. Perhaps a cycle track in the dunes

Regardless of the howls of progress they are determined to go ahead with this ! No doubt they already have their chosen plan in mind and regardless of what anyone says - that is how it is with this lot! Another Greerton Stuff up’ in the pipeline!

That’s a lot of spending to ’fix’ something that isn’t in any way broken or needs improving. I’m sure Waka Kotahi could use the money to fix other roads that are actually broken and I’m sure our 10% could definitely be used more wisely. Whose going to be responsible for paying the imminent budget blowout? $$$