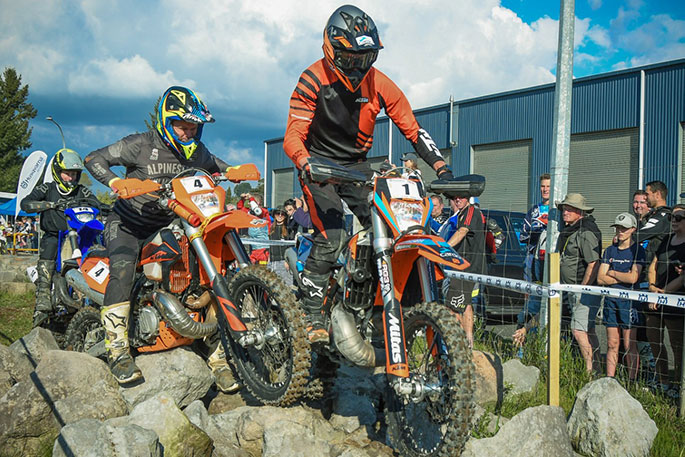 You just know it is probably going to be a last-man-standing scenario when riders line up to tackle any extreme enduro event.

The Husqvarna Hard Adventure Enduro, staged each Labour Weekend in forestry land near Tokoroa, is loosely modelled on the notorious Red Bull Romaniacs international hard enduro that is held each year in Romania.

So when a former winner of that iconic European challenge shows up to race here in New Zealand, he's surely got to rate as a strong favourite to win the coveted Gold Grade trophy.

Birch led a KTM 1-2-3 to the finish of that Friday prelude to two days of gruelling enduro action in the forest on Saturday and Sunday, Wainuiomata's Jake Whitaker (KTM 300EXC) and Helensville's Tom Buxton (KTM 300EXC) forced to play follow-the-leader in this Gold Grade shoot-out.

Cambridge builder Dylan Yearbury (Husqvarna TE300) stepped up to challenge Birch on Saturday and Sunday, but even this two-time former winner of the event could not peg back a rampant Birch, finishing more than 12 minutes behind Birch at the event's conclusion and settling for the runner-up spot overall.

"The prologue sprint race was pretty close and I think Jake Whitaker's better than me on that sort of thing, but I knew he'd find it tough to get past me if I could get into the lead. I got the lead early on and he was breathing down my neck, but I made no mistakes and won it," says the 40-year-old Birch.

"That gave me a choice for starting position the next day and I chose to be the fifth rider away. I didn't want to be the first rider on the course, making tracks for others to follow. Navigation is always easier if you're following others.

"It's tough riding in pumice, but I made it up one of the steep hills without too much trouble, while a few others were zigging and zagging their way up behind me, and that allowed me to build a gap out front."

Birch has a busy schedule working as an off-road riding coach and he is only an occasional competitor these days, but said this was one event that particularly interests him.

Other winners at the weekend were Taupo's Wil Yeoman (Silver Grade) and Logan Shannon (Bronze Grade).