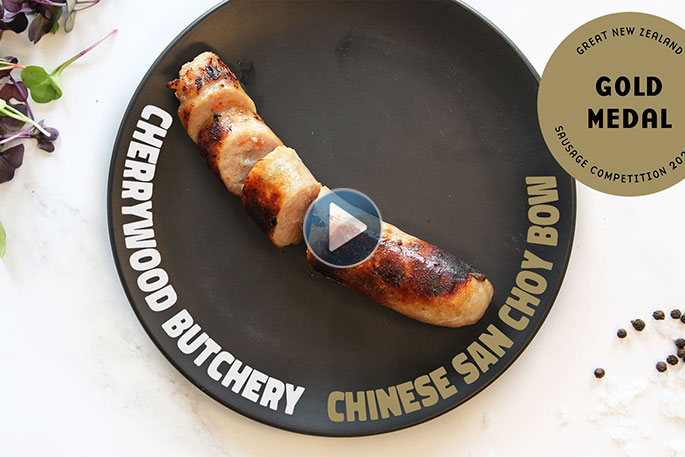 The medal winning sausages were announced last night at a virtual awards ceremony which was watched by industry big-hitters up and down the country.

Despite the disruption of two lockdowns this year, Kiwi butchers have remained resilient and put their best snarlers forward culminating in a record-breaking 605 entries being received from 99 sausage producers across 17 categories.

The journey to supreme status for the winning sausages has been a long and rigorous process with competition organisers adhering to strict COVID alert level restrictions.

Five days of category judging last month by a squad of butchers, foodies, chefs and industry heavyweights, whittled entries down to the top scoring sausages.

From here, gold, silver and bronze medals were awarded in each category with the gold medallists then being re-judged against one another, with Auckland-based, Grey Lynn Butchers taking out the 2020 Supreme Award.

Competition judge, Kathy Paterson says the winning sausage, an Isterband - a traditional Swedish sausage - was a unique, original entry which was technically very well made, making it stand out from the rest.

“The standard this year was very high and when you get a beautifully made sausage, with a lovely texture and the flavour of the meat coming through, you know you have a winner,” says Kathy.

“This was a really delicious sausage where everything was in harmony.”

This year, competition organisers, Retail Meat New Zealand also wanted to acknowledge all the sausage producers who have supported the competition over the last ten years and are delighted to announce Peter Timbs Meats in Christchurch as Producer of the Decade*.

“After collating results from the last 10 years, we are delighted to recognise Peter Timbs Meats as the recipient of this new award,” says event organiser, Megan Claxton.

“They have consistently produced high quality, medal winning sausages over the last decade and have helped raise the standard of the competition.”

Kiwis will also know where to get the best burger pattie this year, as a new mince category was introduced, which turned out six medal-winning burger patties from two categories, with Cherrywood Butcher winning a gold medal for their Gourmet Chicken Burger patties.

The announcement of New Zealand’s top tasting bangers and burger patties comes just in time as Kiwi’s across the country dust off their barbeques in readiness for the summer months ahead.

There is nothing better than throwing some great tasting snags on the barbeque to share with friends and family.

Now Kiwis know where to get their hands on some award-winning snarlers and patties to set their summer barbeques sizzling.

Had to be these two

Congrats to you both.Your Produce is amazing.And thats from someone from a long line of butchers in the Family