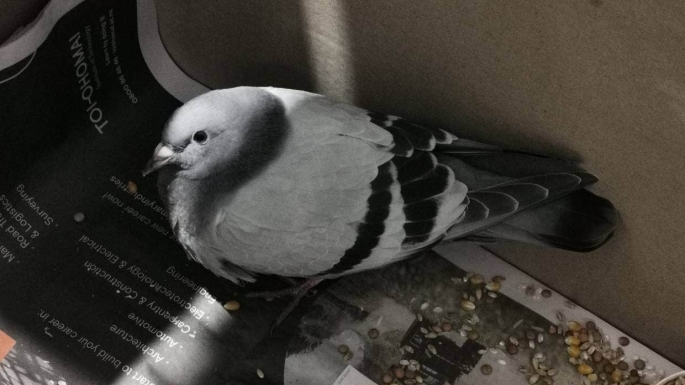 The racing pigeon followed a man around his Papamoa home until he was eventually helped. Photo: Stuff.

A Tauranga man thought he was paranoid when a pigeon started following him around his home, but it turned out the wayward bird was just trying to ask for directions.

The bird had taken a 200-kilometre detour from its intended destination of Manukau, Auckland and instead landed in Papamoa, Tauranga on October 18.

Luckily the pigeon was found by Quentin Van Heerden who was confused as to why the 12-week-old bird had landed at his home and began following him around.

“It made me feel paranoid having this pigeon following me around,” he said. “They would usually fly away when you approach them but this one wasn’t bothered and hopped around right beside me.”

He was able to pick up the pigeon and noticed it had a tag on its foot. He set about trying to solve the mystery.

“It was a bit of a weekend,” he said. "At first we contacted the Department of Conservation thinking it was one of their birds. They recommended contacting some people at Pigeon Racing New Zealand.”

Eventually he was able to locate the grateful owner and set about making arrangements for the bird’s return.

“He gave me a lot of instruction on how to care for the bird and it became a bit of a highlight for our office,” he said.

“We’ve now been given the honour of naming it which we will do when we find out if it was a boy or a girl.”

Van Heerden said the bird was a perfect house guest but he has no idea why it chose to make landfall at his address.

Found racing pigeons can be reported at prnz.org.nz

The dove from above...

What a privilege to be chosen by such a bird... It would be interesting to know if there were any features of the house that looked like "home" to the wayward bird.