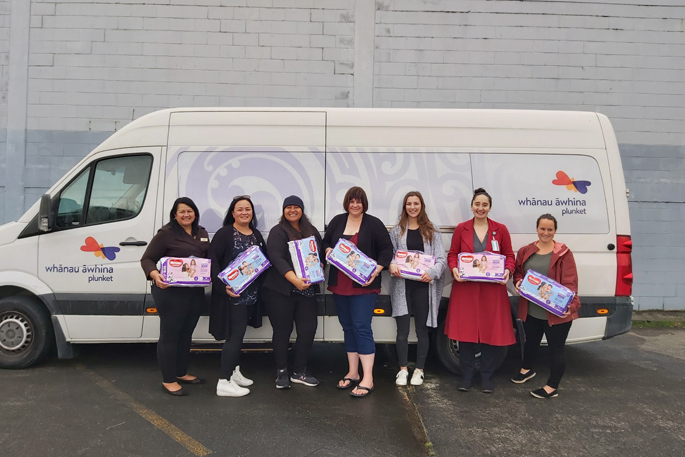 Hundreds of Whānau Āwhina Plunket families across the country felt the aroha of Kiwi shoppers last month, receiving bundles of desperately needed nappies and clothing for their babies and tamariki.

Communities banded together to help Plunket families through contributions made to the Hug it Forward initiative, run by Huggies in partnership with Countdown and New World supermarkets.

This Kiwi generosity has helped to provide:

• 20,000 nappies donated to Plunket families – this equates to putting 600 babies in nappies for one week.

• $7,500 worth of clothing vouchers donated for Plunket families who needed it most.

For some, receiving the nappy bundles has meant they have extra cash to pay for petrol to get to doctors’ appointments, relief when unexpected costs came in or while families waited on financial support.

The impact was even greater for some, who received nappies while in emergency housing under protection, illustrating the urgency and gravity of the need for help.

Marketing Manager for Huggies Pip Catherwood says the nappy bundles were in many cases a lifeline.

“Having access to enough nappies when you have a young baby is something that many of us take for granted. We know through our work with Plunket that the demands of raising a baby coupled with the pressure of paying bills is more than some can manage and that is why we started the initiative.

“2020 has been a really challenging year for a lot of people, but the collective generosity of Kiwi communities has made a tangible difference to the lives the most vulnerable and for that we are very thankful,” she says.

The Hug it Forward donations have helped to make a tangible difference in local communities.

A Plunket Family Start Whānau worker based in the Bay of Plenty says she could really see the impact it was having on families coming through her local clinic.

“I dropped off some nappies to a teen mother, who was living with whānau and awaiting financial support. This young mother was extremely grateful, as she was not receiving any income at the time. The nappies helped her through a financially tough week, which was great.”

The Hug it Forward initiative is one way that families that have been supported this year thanks to Huggies, whose goal is to help parents provide love, care and reassurance to help their babies thrive.

During the nationwide lockdown, Huggies also donated roughly 156,000 nappies to Whānau Āwhina Plunket, equivalent to putting 4,820 children in nappies for a week. This is nearly double the donation of last year.

Since the move to Alert Level 1 in June, another 222,000 nappies were donated by Huggies, benefiting South Auckland communities with its local nappy bank.

Northland was identified as an area needing additional support due to recent flooding and land slips preventing families from accessing necessities.