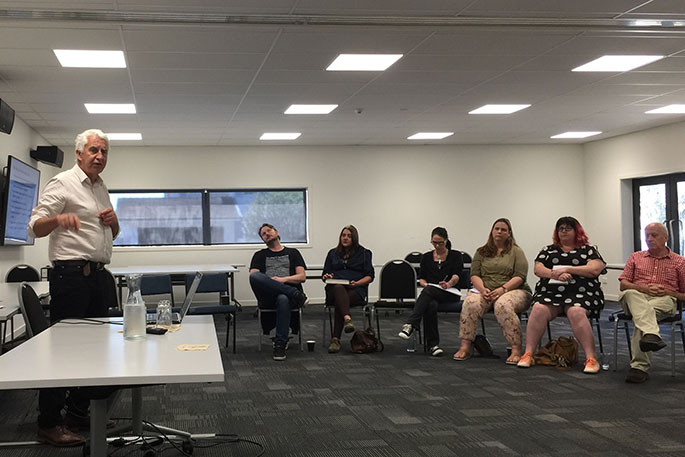 A new group has been launched to tackle child poverty in the Western Bay of Plenty.

A Child Poverty Action Group for the region was launched this week in Tauranga with support from SociaLink, the Western Bay’s umbrella group for social service providers and community organisations.

It has over 4000 members and supporters across the country, including academics, doctors, teachers, health workers, community workers and others concerned about the high numbers of children living in low income families.

Executive member of CPAG for Western Bay of Plenty, Alan Johnson, says while

child poverty could be eliminated completely in a country like New Zealand, too many children don’t have the basics.

“CPAG speaks out on behalf of the tens of thousands of children in New Zealand whose meagre standard of living compromises their health, education and well-being.”

CPAG has regional networks in Whāngarei, Auckland, Wellington, Christchurch, Nelson and Dunedin. It is funded by grants from charitable trusts and donations and receives no public funding.

It provides research about the causes and effects of poverty on children and their families, and informs the public, policy makers, media and politicians of policy changes needed to reduce child poverty.

“We are building a group of people here to advocate for children’s rights and child poverty in the Western Bay,” says Johnson.

“Well-organised direct activism could make a difference, he said, describing a protest in Auckland where 1000 people arrived to sleep in their cars to protest the lack of housing.

“Because of the demographic and relative wealth here, children’s issues are often overlooked, but we have unidentified poverty in this area. It’s one of the most serious issues facing New Zealand.

“For us it’s about public discourse. We need to have the interests and concerns of children locally talked about.”

The group will meet again in December to plan the organisation’s first project for the Bay of Plenty.

You are 100% right on the button. Until we can get people to realize that, while having children may be a God-given right, it is also a great responsibility, we are going to see kids suffering. It is NOT OK to think the Community will make sure our kids are fed and clothed, even if that may be true. I believe parents should be held accountable. If help is needed with addictive negative behaviors, it should be provided, but the responsibilities of parenthood should be covered in schools and, in this day and age there should be no excuse for having children irresponsibly. I hope this group will be providing education as well as practical help.

Quote from above : " tens of thousands of children in New Zealand whose meagre standard of living compromises their health, education and well-being.” And we all know the cause - poor, or complete lack of parenting. Doctors are free for children - no excuse on the health front. Education is there for all - if they can be bothered attending. No excuse there. Well being? Abuse - hunger, lack of adequate clothing no excuse there when the government hands out billions each year. Where does the benefit go?? In most cases the following play a big part - alchohol, drugs, gambling etc etc. Best of luck to this new, concerned group - they will need it! Start with the parents.