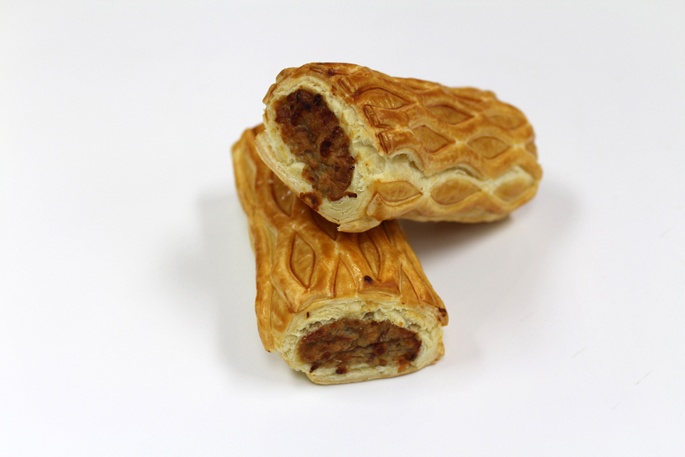 The country's pie king can now add sausage roll champ to his CV.

Anyone who has ever visited Goldstar Patrick’s Pies in Tauranga will have found the walls of the bakery lined with certificates and seven Bakels Supreme Pie Awards trophies.

Patrick is New Zealand’s most awarded baker and today, much to his surprise a new, shiny trophy will join the display and proclaim him the best sausage roll baker in the country.

Four South Island bakeries were among the top 10 finalists with second place going to Takaka bakery, The School Shop entered by Marijke Isley, and third, respectively, to Michael’s Bakery – Hillmorton in Christchurch entered by Michael Meaclem.

The judging took place in Auckland on October 21 with 606 bakeries from across New Zealand entering and a mountain of sausage rolls for the judges to work their way through in the blind judging process.

They were looking for a traditional sausage roll of specific weight and length with perfect, beautifully laminated pastry and a great tasting filling.

After intense scrutiny, the mountain was reduced to 10 finalists before a fresh team of judges, including celebrity judge, Jeremy Wells, got down to the business of finding a legendary sausage roll among them.

Between mouthfuls were mutterings of how high the quality was, some with outstanding features such as bacon-wrapped sausage meat or chunky onions and tomatoes in filling, decorative glossy pastry.

NZ Bakels managing director Brent Kersel says competition certainly lived up to its expectations. Entries were received from right across New Zealand, including 80 from the South Island.

“We sort of planned for how big this competition could be. Initially we were going to include it in the Bakels NZ Supreme Pie Awards which had to be postponed due to COVID-19.

“We’re pleased now that we didn’t because it turned out to be bigger than we thought. We doubled the number of judges two weeks after the entries opened and ended up with 606 entries. That was an amazing response.

“On judging day there are always some entries that don’t turn up, but what a turnout for the first year of the Legendary Sausage Roll competition.”

Brent says the length bakers went to with innovative fillings within the ‘traditional sausage roll’ criteria has encouraged them to consider adding a gourmet category next year.

“People eat with their eyes and food has to look good first. If you can get a sausage roll to look good and back it up with flavour you know that you’re onto a winner.”

Brent says it has been a tough year for bakeries with the impact of COVID and this competition was to encourage people to get back into the bakeries and buy pies and sausage rolls.

“These bakers suffered for a few weeks and we’re in a position where we like to support our trade and hopefully this is going to help get them back on the track.”

“What the judges have tasted today they are very happy with and now that has got to be backed up day after day if you want to make a success of it and I’m sure that the winners will, because it’s really important to you people to make your business successful. This is not about Bakels; it’s about making sure that we have an industry that goes from strength to strength.”

I’ve been eating Patrick Lam’s sausage rolls for a few years now and they have been consistently delicious. Nice pastry and a sausage filling with great texture, flavor and character. Num !!!!

This is a deserved result and we should be thankful we have these pies and rolls on our doorstep. :-)