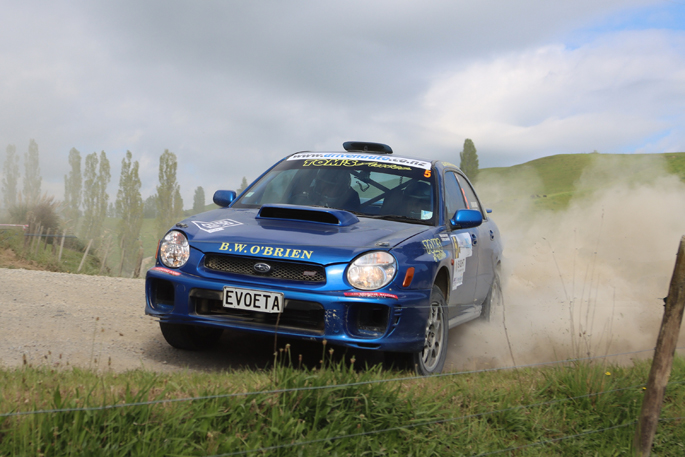 Richard and Sara Mason on their way to victory in the Driven Auto Sales Rally Bay of Plenty at Whakatane on Sunday. Photo: Supplied.

Five-time New Zealand rally champion Richard Mason has made a winning return to the sport by taking victory at the Driven Auto Sales Rally Bay of Plenty.

Richard showed no signs that his driving had slowed during the five years of retirement that followed his last national rally title in 2014.

The Masterton driver, with his wife Sara calling the pace notes, made a steady start to the nine-stage Whakatane-based event, then moved his Subaru Impreza into the lead after five stages had been completed.

He stayed in front by winning three of the remaining four stages and built a 15.7secs advantage over early leader Raana Horan and Michael Connor of Auckland driving a Skoda Fabia R5 on Sunday.

The Subaru Impreza that Mason was driving was same car he won his first New Zealand title with in 2005. It took Mason 1hr 16m 34.9s of driving to complete the 123km of timed special stages.

“The objective today was to have some fun,” says Richard.

“We’ve had this car in the shed for a few years and we’ve done some small club events with it in the last few months and we wanted to do a rally in it.

“The original plan was to do Hawke’s Bay because it’s close to home. But that was cancelled and we decided to come here.”

The only concern for Richard was a broken right front suspension spring platform with two stages remaining but temporary repairs held and had no impact on his pace.

Dunedin’s Emma Gilmour was pleased with a trouble-free run in her Suzuki Swift AP4 to finish in third place, narrowly holding off a late-rally challenge from Aucklander Kingsley Jones (Skoda Fabia R5).

Along with Raana and Richard the stage winners during Sunday also included Pukekohe’s Dylan Turner before he retired his Audi S1 AP4 with a broken prop shaft and Jones who won the final stage.

The rally attracted 51 crews for gravel road competition held in warm spring time conditions in the Manawahe, Otamarakau, Matata and Pukekina districts. A strong turnout of spectators watched the action at the best viewing points.

It was the first gravel rally to be held on North Island roads since October 2019 with the full calendar of earlier 2020 events being cancelled due to Covid-19.

There were 41 finishers while mechanical breakages mainly accounted for the 10 retirements.

The rally was organised by Motorsport BOP Inc and continued the club’s focus on encouraging new competitors with special awards for drivers and co-drivers who had previously competed in fewer than three rallies.

The other Novice to shine was 17-year-old Jackson Clendon from Masterton who finished 14th overall and was also the highest placed competitor with a two-wheel-drive car in his Ford Fiesta.