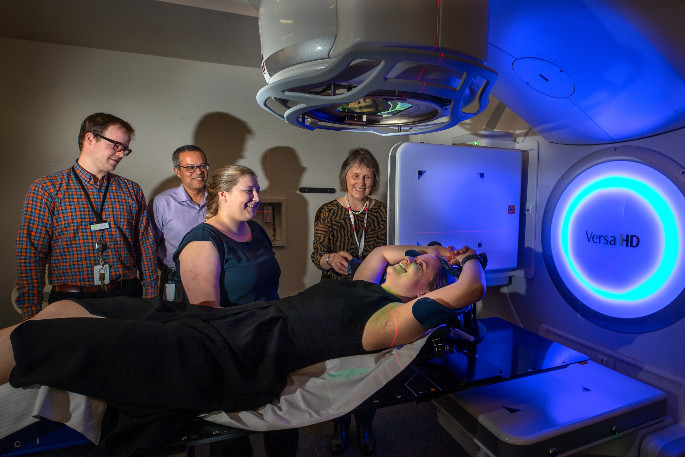 Tauranga’s Kathleen Kilgour Centre has adopted a breakthrough regime for women with low risk breast cancer and it is slashing the time these patients need radiotherapy.

The new treatment means women with early stage breast cancer only need five doses of radiotherapy as opposed to the previous 15. The five doses are higher but the amount of radiation overall is lower than the previous regime.

The five doses are given daily for five days whereas the 15 doses were given over a period of three weeks. Each treatment takes 30 minutes so time has reduced from 7.5 hours to 2.5.

Kathleen Kilgour Centre radiation oncologist Dr Glenys Round says the regime has been brilliant for the two patients who have undergone the therapy so far.

“The first patient sailed through the treatment and I saw her for the first week and then two weeks after that, and [she had] virtually no side effects at all, a little fatigue as one might expect, very minimal skin changes.”

She says the second patient had disability issues so the shorter treatment time suited her perfectly.

Up to 30 per cent of the centre’s workload relates to breast cancer so having shorter treatment times frees up capacity for other patients, says Glenys.

“We’re going to get a lot more patients through treatment in a shorter time. There will be benefits not only for breast cancer patients, but patients in general.”

The centre adopted the shorter treatments after results of a clinical trial in the United Kingdom proved the regime is equivalent to the previous standard treatment at the five year follow up.

This regime is part of a nationwide agreement to treat a certain category of patients although the UK trial included a wider category.

“For New Zealand the constraints around who was eligible are much more rigorous than what was offered in the clinical trial, because this is a new technique and we need to be sure that it is safe.”

KCC chief executive Letham White says the regime is fantastic for patients and he is interested in how it will evolve over time and if it can be used to treat other tumour streams.