The show is over for Winston Peters 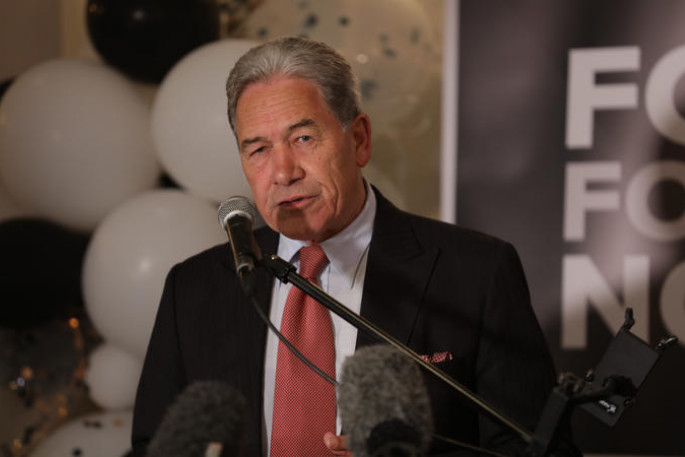 He's the most recognisable figure in the country's political history and is still refusing to concede, but for Winston Peters and New Zealand First, the show is over.

With more than half of the vote counted tonight, NZ First has managed just 2.4 per cent of the vote, and will not have any MPs in the next Parliament.

But Peters has given no indication of whether he plans to retire, addressing supporters but not conceeding defeat this evening.

Peters thanked his supporters this evening, but said as for the next challenge, people would just have to wait and see.

The NZ First Leader made the comments a short time ago as he addressed supporters at the party's headquarters at Russell.

He said elections were about democracy, and politicians should not stop trusting the people.

"We committed ourselves three years ago to be a constructive partner in government, to provide certainty and stability in a fast-changing world. We all recall that in 2017 after the election night, we predicted an economic crisis, and sadly, it's here.

"Its effects have not been well canvassed, and it there's one cause for grave disquiet, it is the nature of the economic crisis not being totally understood. This was an election because of Covid-19 and extended lockdowns, was like no other this country has ever seen even in wartime.

"For 27 years there has been one party ready to question the establishment and challenge authority and tonight more than ever, that force is still needed. For in any challenge, it is the preparedness to stand up to that challenge, win or lose, that really matters."

He congratulated candidates who have been successful tonight and finished his speech: "God bless you and God bless New Zealand. Thank you very much." 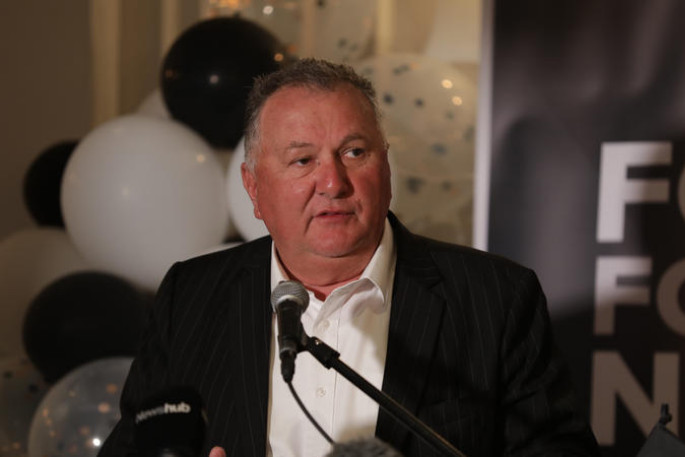 A life in politics

Winston Peters has been a force in New Zealand politics for four decades.

In his maiden speech in 1979 he called for the 39th Parliament to bring hope.

He spent much of the last three years, in particular the last six weeks, hoping for another chance.

But for Right Honourable Wynston Raymond Peters (the actual spelling on his birth certificate) any hope for his political survival has come to an end.

It was Northland where Peters grew up and that's where he will see out his days - boating and horseriding, with his partner Jan Trotman and his dog, Beau.

Whananaki, a small coastal town about an hour out of Whangārei, is his sanctuary.

Some of his family still lives there and it's where he retreats to when the going gets tough.

In his darkest days and moments of despair Peters says he always had his boat and Whananaki and that made him a lucky guy.

He escaped there in 2017 after being crowned kingmaker and he'll escape there once more now the final whistle has blown on his political livelihood.

Peters first entered politics as the National MP for Huana in 1979 and bar a three year hiatus from 1981-1984 and again when New Zealand First failed to meet the 5 percent threshold in 2008, he's been there throughout.

After returning to Parliament in 1984 Peters won the Tauranga seat - a seat he would continue to hold under National until 1993 when he left the party, winning it again as an independent, before setting up New Zealand First and going on to win the seat again.

He held the seat until 2005, losing the seat to National MP Bob Clarkson.

He tried unsuccessfully to win it back again in 2008 but lost to fledgling Nat, Simon Bridges, by more than 11,000 votes.

That was the beginning of nine years of a National government and almost a decade of opposition for Peters and his party until finding himself in the kingmaker position during the 2017 election campaign. 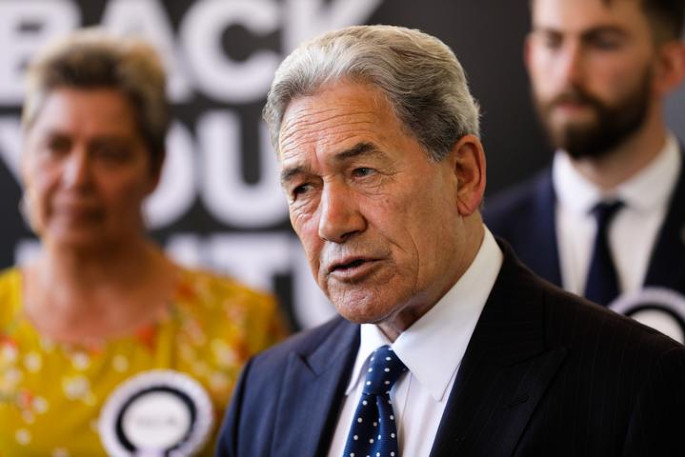 His first stint as minister was in National's fourth government with Jim Bolger as prime minister.

Peters was made Māori Affairs Minister in 1990 but only lasted a year - Bolger sacked him in 1991 after regularly speaking out negatively about party matters.

As a backbench National MP he continued to criticise the party before resigning in 1993.

Despite his public disapproval of Bolger, he again made him prime minister in 1993 but not without his own significant gains, namely deputy and treasurer - a role specially created and more senior to finance minister.

A dispute broke out between the pair over the privatisation of Wellington International Airport and Peters was sacked was from Cabinet in 1998.

New Zealand First retreated to the opposition benches, but several of Peters' MPs opted to stay in government, causing a split in the party.

None of the MPs who split away from Peters returned to Parliament after the 1999 election.

During the fifth labour government from 1999 - 2005 Peters and his party were in opposition until a deal was done with Helen Clark after the 2005 election that saw him win the ministerial portfolios of foreign affairs and racing, though he remained outside Cabinet.

Peters bailed out of politics in 2008 when New Zealand failed to make the 5 per cent threshold but mounted a return campaign largely from the homes of party president Anne Martin and her daughter Tracey Martin, which led to a win in the 2011 election.

In 2015 Peters made a last-minute decision to run in the Northland by-election and then Labour-leader Andrew Little threw the party's support behind him, in an effort to take the seat off National.

The deal worked and Peters won the seat but couldn't hold onto it when the 2017 election came round - it once again returning to National.

The party remained on opposition benches through to 2017 when Peters was kingmaker and made Jacinda Ardern prime minister after negotiations with both her and then-National leader Bill English.

He held the foreign affairs and racing portfolios during this period.

Peters has had a number of policy wins over the years - most generated as a result of robust coalition negotiations.

His party's most celebrated success though, and one that hasn't been scrapped by succeeding governments, is the Super Goldcard for pensioners.

New Zealand's First's time from 2005 to 2008 was dominated by controversy over political donations, and once again the party's under formal scrutiny for its fundraising practices.

Back then when Labour under Helen Clark was fighting for the elusive fourth term and Peters for his political skin, he received a parliamentary censure after a high drama Privileges Committee inquiry over donations made to the Spencer Trust.

The police and the Serious Fraud Office both investigated and the party was cleared of any criminal wrongdoing, but it was only a matter of days before the 2008 election the police said publicly no offence was committed.

Peters lost Tauranga and falling shy of the threshold after polling just over 4 percent, New Zealand First was out of Parliament.

Fast forward to 2020 and the New Zealand First Foundation has been under SFO investigation, again over political donations.

The watchdog has charged two people with obtaining by deception after an investigation into the New Zealand First Foundation.

They publicly confirmed ahead of the election that neither defendant was a minister, sitting MP, or candidate in the then-upcoming election (or a member of their staff), or a current member of the New Zealand First party.

The two charged have name suppression and that will remain the case for now despite multiple attempts by RNZ and other media organisations to have the suppression lifted ahead of the election.

From the infamous 'No' sign to the interview with RNZ's Guyon Espiner that revealed Peters keeps important historic documents in a briefcase in the boot of a car - there have been many unforgettable moments spanning the 75-year-old's career.

Peters' love-hate relationship with the media has been a constant fixture, and something his supporters have enjoyed him playing up to over the years.

There are many catchphrases of Peters and he is acknowledged by MPs of all stripes as one of the better orators and performers in the House.

His speeches to his supporters don't go by without the inclusion of 'buy yourself some insurance' and talk of the 'neo-liberal experiment' to name just two.

Any press gallery journalist has been on the receiving end of 'words do matter', 'I don't believe in your polls' and 'don't try being a Philadelphia lawyer with me'.

At the same time Peters is incredibly chivalrous and prefaces most insults and criticism by saying, 'with all due respect'.

Despite New Zealand First holding all the Māori seats at one point, Peters has moved his position to one that they should go.

Māori however give reasonable support to the party and Peters is one of the most respected politicians at any marae across the country.

He holds incredible mana in the Māori world - being of Ngāti Wai descent - born to a Māori father and a Scottish mother.

Many who voted in this year's election wouldn't be old enough to know a time when Peters and his party wasn't in Parliament.

And Peters himself would struggle to remember a time when politics didn't dominate his life.

He described himself as an optimist in his maiden speech all those years ago and his departure at an election, rather than on his own terms, means he's unlikely to have one last word in his valedictory speech.

Peters says there's a belief that if you do the preparation and training and make some personal sacrifice, then you're going to make it.

It's a belief he grew up with and carried with him throughout his long political career.

There's no doubt Peters has sacrificed a lot and after a mammoth and incredibly uncomfortable 12,000km bus tour around the entire country for six weeks few would argue he didn't do the work.

But on this occasion Peters and his party did not make it.

The timing is good. Thank you for your service not only to Tauranga but to NZ. You have served us as a city and a country through good times and bad. It’ll be interesting to watch where your future leads . . . perhaps a mayoral position could work . . . just thinking . . .

... he did a lot for Tauranga and was a good candidate for us. People either seemed to love or hate him, but, whatever your politics, he worked tirelessly and gave good service to our country. I hope he enjoys his well-earned retirement.

A billion dollar slush fund he still couldn’t buy his way in for another 3 years . Shows how out of touch he really was . Hope the last 3 years was worth losing everything you worked for