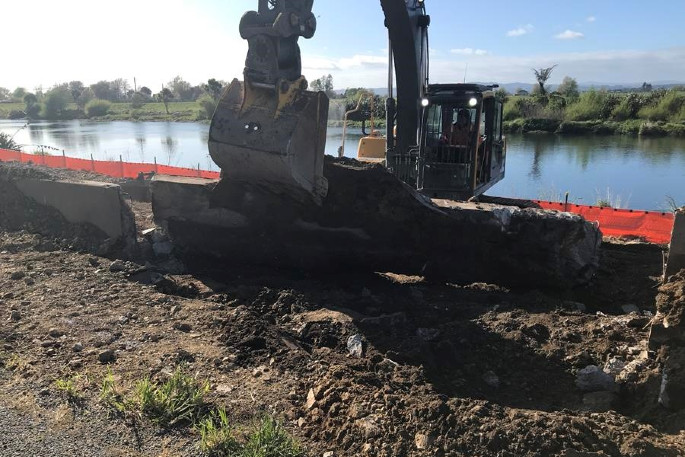 The commencement of flood protection projects on the lower Rangitāiki has signaled the start of the 2020 construction season for the Bay of Plenty Regional Council engineering team.

Work is underway to replace a 300-metre section of flood wall on Grieg Road, with Waiotahi Contractors making good progress on what is expected to be a four-month construction process.

Investigations on the floodwall were carried out after the April 2017 flood which has led to the design of the new earth stopbank with a sheet-pile centre.

Engineering Team Leader Peter Hay says that during the construction period, that section of West Bank Road will be reduced to one lane controlled by a traffic light and Council and contractors thank road users for their continued patience.

“Designs are being finalised for the replacement of another section of Rangitāiki River floodwall on East Bank Road, near the Thornton School and work is progressing on concept designs to be shared with owners of properties adjoining the remaining flood walls on College Road, Edgecumbe,” says Peter.

Meanwhile, Tracks Contracting is progressing upgrades to the left stopbank of the Rangitāiki Floodway north of McLean Road. Tenders for the next stage of stopbank upgrade, from State Highway 2 (Awakeri Road) to McLean Road are currently being evaluated with a decision due next week and work expected to start in mid-November. Work on the right bank is expected to begin in January 2021.

The purpose of the multi-stage Rangitāiki Floodway Project is to protect the Edgecumbe Township by diverting high river flows in times of flood.

Floodwall replacements and completion of the final sections of the Rangitāiki Floodway were among the flood protection and community resilience projects for which the Regional Council received $23 million from the Crown Infrastructure Partners Fund.

Across the Regional Council rohe the funding accelerates six major projects that are expected to secure over 130 full-time equivalent positions with local contractors engaged mostly with earthworks and associated culvert, piping, construction, and site and pasture restoration.

In addition this stimulus will provide downstream economic and social benefits.