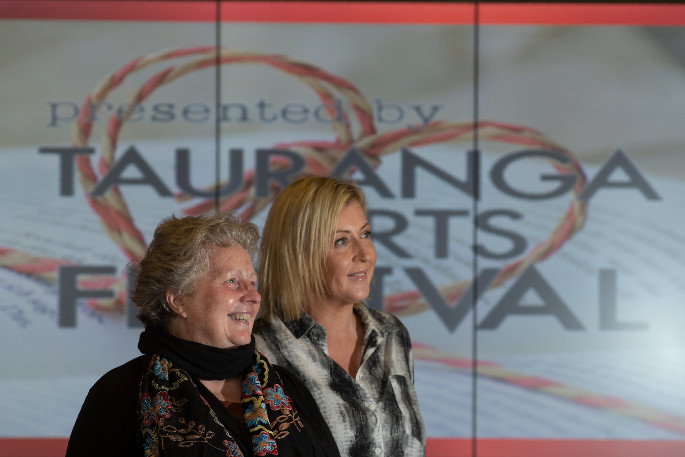 Sandra Simpson and Nikki Hansen from the Tauranga Arts Festival prepare to open the doors on the rescued Escape! literary festival.

Festivals are popping up all over the place as organisers shed the shackles of a pesky pandemic.

One of those is touted as ‘the little festival with big ideas’ – Escape! - which was originally scheduled for Queen’s Birthday Weekend.

The festival fills in the gap year between the biennial Tauranga Art Festival but focuses on big thinkers and literary talent.

Tauranga Arts Festival manager Nikki Hansen says the festival is pared back compared to what was planned for June and they have funded it out of their reserves.

“We just wanted to reengage.”

There is some serious literary talent and “thought makers” attending this weekend’s pop-up festival.

One of the sponsors is the University of Waikato which will host a day of events on the Saturday before the speakers move to Baycourt on Sunday. Ticket prices for some events are as low as $5 for students.

“We are keeping everything really affordable in what has been a difficult year.”

Tauranga Arts Festival literary programme manager and publicist Sandra Simpson says they had heard that people wanted the festival to go ahead in some form and they had some ‘rainy day reserves’.

“What could be more of a rainy day than this? We just hope Tauranga gets behind it.”

There are 11 sessions over two days.

Comedian, broadcaster and sustainability advocate Te Radar is ‘telling tales’ on Sunday while author and ‘wild swimming advocate’ Annette Lees talks about her penchant for taking a dip.

Annette grew up in the Eastern Bay of Plenty and records a year of swimming outdoors every day; in the sea, rivers, lakes, ponds, estuaries, wetlands and springs for her book Swim.

She also collected stories, including forbidden swims, endurance swimmers of the Depression, and swimming Anzacs.

All the details of all the events can be found at: www.taurangafestival.co.nz