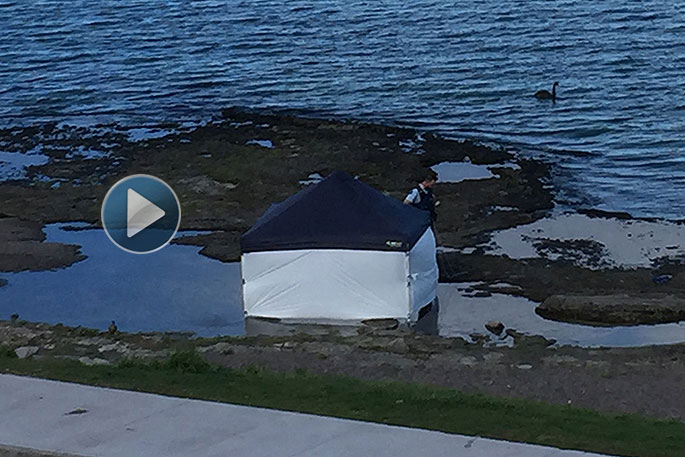 Police at the scene where the bodies have been found. Photo: Daniel Hutchinson/SunLive.

Police are making enquiries after two bodies were found lakeside by a member of the public in Taupo this morning.

Detective Senior Sergeant Ryan Yardley says the bodies were found just after 7am near Mere Road.

"At this stage, Police are working to establish the identities of the bodies, and a post mortem examination will be conducted."

He says a scene guard will remain in place.

Police are conducting further enquiries as to the circumstances.

Police have cordoned off the lakeside carpark off Lake Terrace near the bottom of Mere Rd and two tents had been erected.

One was in the carpark and another was on a rocky ledge that stretched into the water.

He has been told the bodies had been spotted in the lake initially, but was waiting on an update.

“It’s very sad on such a beautiful day.”

Trewavas sysd it's a very high profile site and is used by locals and tourists alike.

“It’s a very well traversed walkway and to find that this morning was devastating.”

The area is a popular recreational spot, offering access to the lake and also featured a nearby hot spring which flowed into the waters, attracting large numbers of visitors in the warmer months.

Half a dozen marked and unmarked police vehicles were at the scene. There were no non-police cars visible in the carpark.