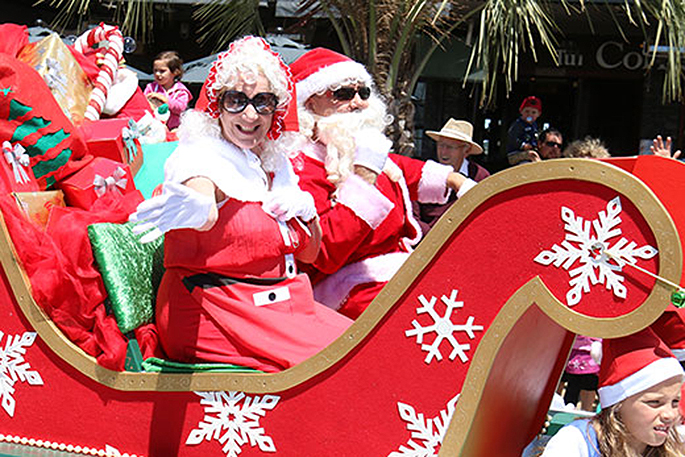 The traditional parade, which sees floats including the man in red go down Devonport Road and The Strand, has been replaced with a Christmas installation.

Tauranga City centre will host what is being described as a major Christmas installation, replacing this year’s Trustpower Christmas Parade

The traditional Trustpower Christmas Parade is getting refashioned for 2020 due to COVID-19.

Mainstreet Tauranga has announced The Trustpower Toi Tauranga Christmas Art Festival that will feature a major light installation and community performances, and is expected to be a major drawcard for the city centre.

“With so many events being cancelled globally due to COVID-19 and alert level changes, 2020 is an unprecedented year to be staging events.

“Our annual Trustpower Christmas Parade can only be staged under Level 1 conditions which poses a significant risk in these uncertain times.

“It takes thousands of man hours, brings between 25 – 30,000 people into the city centre for the morning of the event and involves over 800 participants and volunteers.

“Our concern is that if we had continued with parade planning and then had to cancel several days out, if alert levels changed, there would have been a significant loss and waste of time and resources.

“Other cities are following a similar decision path with their parades, so we felt it vital we make a decision in the best interests of our community. This way we can still provide a community event that will be significant for the city, but we can do it with certainty.”

Sally says the new initiative can be staged in all alert levels and will be in the city centre for 6 weeks meaning it will deliver a better outcome for sponsors, stakeholders, the city centre business community and the public.

“We’ve taken the core elements of the parade – the community engagement, performances and the visual spectacle of the parade and developed The Trustpower Toi Tauranga initiative that features light, art, entertainment, visual displays and more for the public to come and enjoy.”

Mainstreet Tauranga and Trustpower remain tight-lipped around the exact nature of the light installation.

“We are so excited by what we are bringing to Tauranga, however the full details are under wraps for now as we wish to surprise and delight the community when they see it come to life.

“What we can say is that it features some dynamic light installations that have appeared at the Sydney Vivid Light festival in in other major cities across New Zealand.

“We can’t wait to see the reaction when the public sees them for the first time.

“This installation will put us on the city light trail and we will be inviting the community and kids to come down, interact with the installation, enjoy the entertainment and embrace the social and environmental messaging that sits around it.”

Trustpower Community and Communications Advisor Ashleigh Cleaver says they are excited with the revamped initiative.

“When we first saw the proposal from Mainstreet Tauranga we said ‘This is fantastic!’ The Trustpower team are proud to supporting such an amazing new event in our home city. While it is sad the parade can’t go ahead, it is exciting to have room to try something new this year.

“ The themes around the light installation and events surrounding it really resonate with our company values - the themes of Tiaki (care for people and place), Urutau (adapting, pivoting and changing to continue to provide what is needed), as well as adopting a digital mindset – looking for ways where technology can help, enhancing and make positive change for the community."

Trustpower Toi Tauranga will launch the last week of November in the city centre.

I love the idea. Perhaps it could replace or even run in conjunction with future Christmas Parades. Hope it’s Christmas and not just business advertising. My only concern is that people will be able to do a lot of ’window shopping’. Are the rough sleepers and their filth going to be moved on? Done right this could become spectacular. Imagine a street full of shops all participating in a Christmas focus.