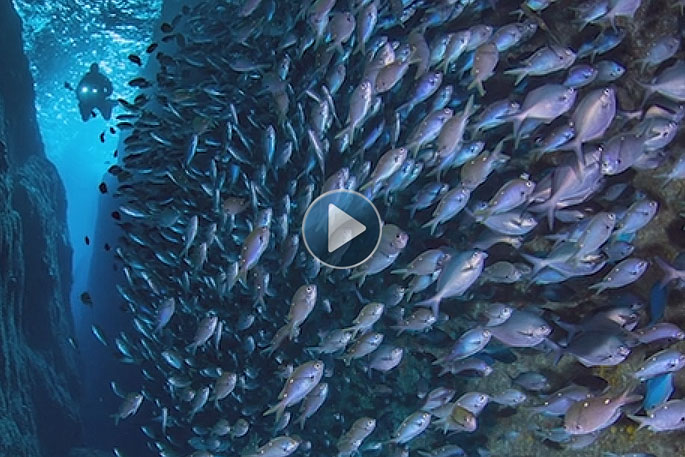 NIWA have some talented staff and who are celebrated in the annual NIWA staff photography competition.

A NIWA marine ecologist has added his name to a very short list of people worldwide who have seen – and photographed the elusive football octopus.

Not to be confused with Paul the common octopus who gained world fame by accurately predicting the results of 2010 World Football Cup games, the football octopus (Ocythoe tuberculate) is rarely seen and does not predict scores.

NIW’s Crispin Middleton, an accomplished underwater photographer, was swimming last November in the Poor Knights Marine Reserve when he spotted a football octopus inside a salp.

Crispin has dived the Poor Knights more than 1000 times and hadn’t seen the elusive species of octopus before that day and hasn’t seen them since.

He suspects the 50 he saw might have been a breeding aggregation.
Salps are barrel-shaped invertebrate that resemble jellyfish.

Crispin says that there aren’t many things that eat salps and the football octopus may have been hiding in them to avoid predation from larger fish. ⠀

Crispin’s photograph was judged the winner of the special award category in NIWA’s annual staff photographic competition and has also seen him named as a finalist in the New Zealand Geographic Photographer of the Year contest.

The NIWA competition has attracted a large range of entries that feature some of New Zealand’s most awe-inspiring locations in which staff undertake their environmental science.

Coincidentally, the winning photograph in the People’s Choice section, was also taken in the Poor Knights.

Marine ecology technician Richie Hughes’ image was taken at Long Cave when the sun was low in the sky sending beams of light through the water into the cave which was full of blue mao mao and two-spot demoiselle.

“Framing an image like this requires the use of natural ambient light and light added from your camera’s flash guns. It’s the balance between these two, along with perfect composition, that may create the perfect exposure,” he says.

Other winning shots included ones of Lake Matheson, Lake Mangamahoe and Mt Taranaki, and koura resting on a fallen nikau palm frond.

The judges of this year’s competition were Ross Giblin of Stuff and Gerry le Roux from Science Lens.