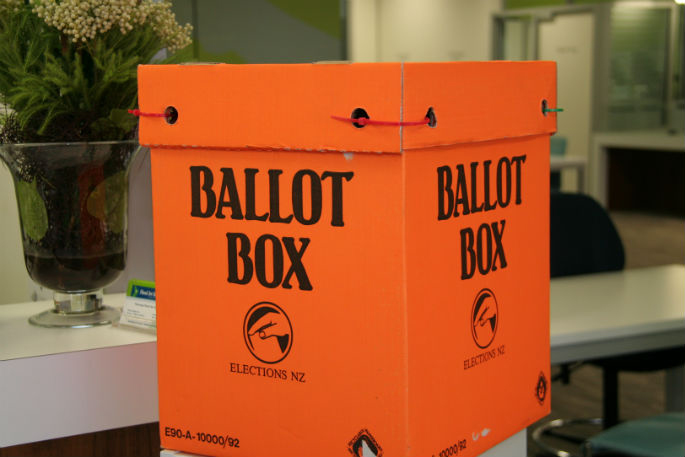 Ballot boxes have been dropped off at prisons around the country. File Image.

For the first time in a decade, prisoners serving less than three years can vote in the general election.

A 2010 move to restrict prisoner voting rights was reversed last year, following criticism by the Waitangi Tribunal, the UN and prison advocates.

Now almost 2000 prisoners serving out a sentence will get their say in Saturday's election and two referendums.

At Christchurch Men's Prison a man, who we'll call Adam, says voting has been extremely important to him and helped give him a stake in his future.

"It is awesome, I get the opportunity to represent the guys in here. I know we get a bad wrap, and rightly so, but it is in the community's interest for us to be healed.

"The only way for us to be healed is for us to be brought back into society. If we get to vote it is a step towards feeling like we are part of that.

"I voted for Labour, simply because they are the most likely party to even the balance and look after the poor. But one thing that did concern me was about their housing policy ... pretty piss poor really."

Many of the prisoners rely on TV, radio and information provided by the Electoral Commission which is handed out in prison.

"It is exactly like a polling booth in the community, the only thing is there are prison guards," he said.

A 2019 Waitangi Tribunal report found the law disproportionately affected Māori due to both incarceration rates and the low re-enrolment rates following release from jail.

Prisoners held in remand before their trial have always been able to vote, with 3700 expected to do so this year.

Christchurch Men's Prison Director Joanne Harrex says prisoners have been actively informed about the enrolment and voting processes since early July, with posters, leaflets and the chance to ask questions around party policies.

She says late last week, there was a sea of Electoral Commission orange coming and going in waves as men were escorted to voting kiosks inside the prison set up by the electoral commission.

About two thirds of the men at Christchurch Men's Prison elected to enrol, and more than 120 prisoners voted.

Another inmate, who we will call Chris, voted no to both the referendums.

He says what matters most to prisoners are issues on housing, education and employment, and his main concern is for his children.

"We are human beings, and it is important that we still have some rights.

"I am about to get out. I knew who I was going to vote for, and how important it was, especially this year with COVID-19; every vote counts."

He says being able to exercise his democratic right gives him hope to "rebuild his life" and contribute back to the community by the time he left prison later this year.

Harrex says overall, voting has given prisoners hope, and community support for prisoners re-entering society is crucial to preventing re-offending.

objective of imprisonment is to punish.Equal second is the need to rehabilitate. Nothing to do with "handing over sovereignty", everything to do with common decency and a better society.

Until your "debt to society" is paid, you abnegate your rights as a member of that society. If it turns out that a given Ethnicity is over-represented, that is something that needs to be addressed in that context; if the Law hadn’t been broken they wouldn’t be in jail. There’s no point in wailing about their rights being taken away; they did it themselves. As for us bowing to pressure from the UN, "prison advocates" and "The Waitangi Tribunal", since when did we hand over our sovereignty to a bunch of bleeding hearts who can’t seem to think straight? It’s really easy; if you want to have a say in issues that matter, like housing etc. THEN OBEY THE LAW!

They regret their crimes so much that can’t wait to get sent back to prison judging by the recidivism rates. But I suppose that is “the system” forcing them to commit more crimes. We can always find others to blame for our own failings.

like draconian attitudes have never achieved any good result. By far the majority of prison inmates regret their crimes and want to engage in society. Voting is one positive way for them to re engage, and will have no adverse effect on the result. The notion that every inmate will vote Labour is ridiculous.

They kept that law change pretty quiet didn’t they. We all know what they will be voting for, no need to ask them. Do you think they would be in support of tougher sentencing? Less taxes for workers? Don’t think so. Increasing benefits? Yup. More taxes on workers? Damn skippy Yup. That’s an extra 2000 labour votes and an extra 2000 legalize cannabis votes.

When you break the law of the land and are sent to prison for your crime, your give up the rights of the law abiding citizens, who pay to separate criminals from society. This must be repealed.

Prisoners, no matter how long a sentence they are serving should not have the right to vote. I guess the majority of them will vote for the legalisation of recreational cannabis, then this will also become a right, for inmates to be high on drugs..........legally!!