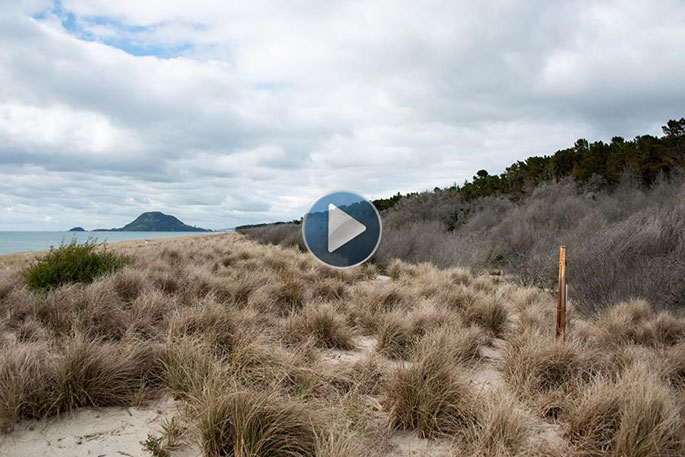 Six Matakana Island locals are walking the length of their motutere to help restore its flora with help from the Provincial Growth Fund.

The group is carrying out weed surveillance down the 26km long shoreline of Matakana Island by recording the number of pest plants invading its sand dunes.

The work will then help inform the Bay of Regional Council plan of attack for removing the weeds.

The surveillance is made possible through a Provincial Growth Fund investment of $8.2m into some 20 projects being delivered by Whakatāne District Council and the Bay of Plenty Regional Council.

The projects span environmental initiatives, roading, and infrastructure and are creating employment and training opportunities in the wake of COVID-19.

A portion of the cash injection has been allocated to Coastal Projects throughout the Regional Council’s rohe, including Matakana, Waihī, Kaituna and in the eastern Bay of Plenty.

Matakana Island local Hayden Murray said it was a huge job but would be worth it with the hopes more taonga species would return to the island as a result.

“Italian buckthorn, the Sydney golden wattle, coastal tea tree and bone seed are nasty invasion plants which smother and choke out our native species. The majority of the pest weeds have made their way over from the mainland,” he said.

“By recording their numbers, we are helping to eliminate them from our shoreline in the future, which in turn will help some of our native sand dune plants return to our shores.”

The location of the pest plants was plotted on iPads by GPS. The task had its challenges, including difficult access and having to work around the tides.