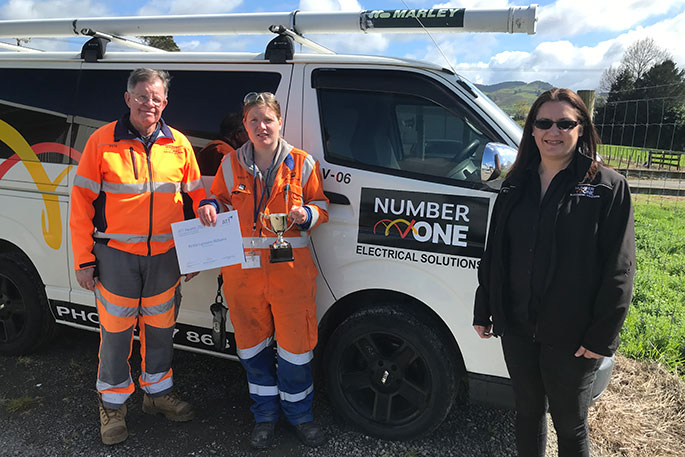 An electrical apprentice at Number One Electrical Solutions in Waihi has won the Nexans Excellence Award for Year 1 of her apprenticeship.

Kirstie Williams received the award as part of the national awards held by the Apprentices Training Trust, one of the country’s largest apprentice training organisations.

It was awarded alongside 88 other apprentice electricians, plumbers, gasfitters and drainlayers, at the virtual event held as a result of COVID-19, to celebrate graduations and awards.

Kirstie’s training is focusing on domestic, commercial and industrial electrical and has spent the last few months at the Oceana Gold Mine in Waihi, testing and carrying out maintenance.

She is part of ATT’s managed apprenticeship scheme that recruits, employs and places apprentices with host businesses who help them learn their trade.

ATT chief executive Helen Stephens says Kirstie is excelling as an apprentice at a time when the spotlight is shining on apprenticeships and trade careers:

“Apprentices are now needed more than ever - while we’ve all experienced major disruptions this year it hasn’t dented the long term need to grow trade skills.

“The housing shortage remains along with the need for more infrastructure, borders are still closed and apprenticeships are an attractive career option as alternatives become more uncertain.

“Kirstie is proving herself at one of the largest industrial sites in New Zealand and thoroughly deserves to do well - we wish her all the best for the future."

ATT has supported apprentices into careers for almost 30 years and is the largest employer of apprentice plumbers in the country.

This year eight electrical apprentices have won awards and there are eleven graduates.

Tahi Spinks, Director of host business Number One Electrical Solutions, says Kirstie has huge energy and enthusiasm for her work and is a great asset to the team:

“She’s really committed - right from the start we knew her drive comes from wanting to develop a good future for her and her young son. She always has a smile on her face and gives us all a bit of cheek at times.

"Our customers like her and she gets stuck in whether it’s a small domestic project or a job at a large gold mine. She loves her work and has a great future ahead of her.”

ATT’s annual graduation and award ceremony celebrated the achievements of 89 apprentices across the country both graduates and current apprentices. The event was delivered online to an audience of host businesses, and the family and friends of each graduating or award winning apprentice plumber, electrician, gas-fitter and drainlayer.

ATT is a registered charitable trust that recruits, employs and places apprentices into ‘host’ businesses in the plumbing, gasfitting, drainlaying and electrical trades.

ATT calls this a ‘managed-apprentice model.’ It has 345 apprentices across the country.

ATT is the largest employer of plumbing apprentices in the country and works in partnership with around 200 host businesses in the plumbing, electrical, gas-fitting and drain-laying trades.