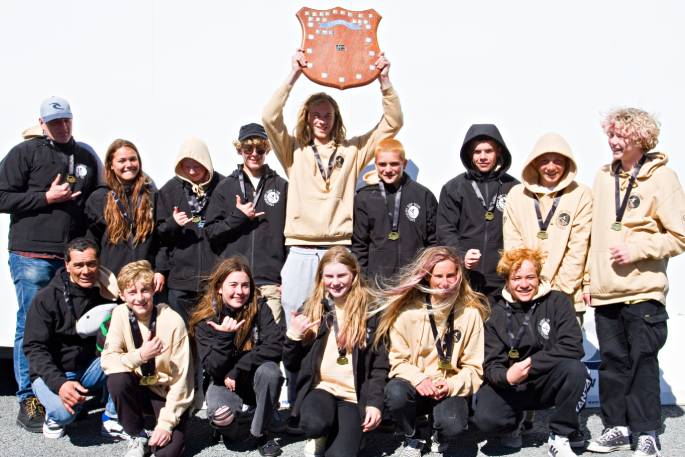 The Canterbury Junior Surfing Team has overcame a fierce three-way battle with Bay of Plenty and Auckland to win the 2020 National Scholastic Surfing Championships.

The surf battle saw the lead switch several time between the Canterbury Team, Bay of Plenty and Auckland, before the title headed south for the year.

It is only the second time in 32 years that Canterbury has claimed the title, the last coming in 2018.

The dominant Bay of Plenty, who has won the title a record nine times, finished runner up leaving Auckland in third place, still hunting for their first team title at the event.

The final day was held at Kaikoura and played out in solid 1.0m waves at Meatworks Beach.

Despite the nice swell, a strong cross shore wind blew up mid-morning making conditions challenging for all of the finalists.

Canterbury surfed to victory with three titles from their five finalists.

Titles went to Under 16 surfers Jai Oakley and Ava Henderson as well as the youngest team member Jack Tyro who claimed a title in the Under 14 Boys Division.

It was the conversion rate of finalists to winners that sealed the title for Canterbury with Bay of Plenty narrowly missing out on gaining titles from their eight finalists.

Premier titles in the Under 18 Divisions went to Tom Robinson from Northland and Jaya Reardon from Otago.

Robinson helped his team to fourth overall and was welcomed back to shore by a stirring haka from his team mates.

Northland had three further finalists which saw the team narrowly miss out on a podium finish.

Jaya Reardon claimed Otago’s first title in two years with her performance being underpinned by an awesome right hander mid-way through the final that netted her a 6.25 point ride.

Leia Millar claimed the first of two titles for Auckland when she won the Under 14 Girls Division.

Millar was a stand out all week and her performances were also good enough for her to win the Adam Clegg Award for Breakthrough Performer of the Event.

The award is voted on by all participants at the event and is a testament from their peers.

Bay of Plenty’s Jacob Saunders won the Breakthrough Performance Award for the guys after standing out all week in the Under 18 Boys Division.

Saunders came up short of the win on the final day with a runner up finish.

On his final wave seconds prior to the final hooter, Saunders required a 6.21, but finished with a 5.0 point ride much to the disappointment of him and his team mates.

Auckland’s second title came in the Under 18 Longboard Division with Nat Fitt carrying on his standout performances from the week of surfing.

It was a repeat of the 2019 final for the longboarders and Fitt was happy to reverse the result after finishing third last year.

Coromandel secured just the one finalist with their lone female, Pia Rogers, finishing fourth in the Under 14 Girls Division.

The five-day event rounds out a series of regional qualifiers for the eleven teams in attendance. 110 surfers participated in the event after having qualified to represent their twelve-person teams.

The National Scholastic Championships comprises seven age group divisions for males and females across both shortboard and longboard disciplines.

Please see below for final results from the 2020 National Scholastic Surfing Championships presented by Pub Charity completed at Meatworks, Kaikoura on Friday.

Full results from the event can be viewed here.

The 2020 National Scholastic Surfing Championships is sanctioned by Surfing New Zealand, the Secondary School Sport NZ and supported by the New Zealand Sports Collective, Sky Sport Next and Pub Charity.

For more information on these events please contact Ben Kennings on 021 2278732 or email benkennings@surfingnz.co.nz.