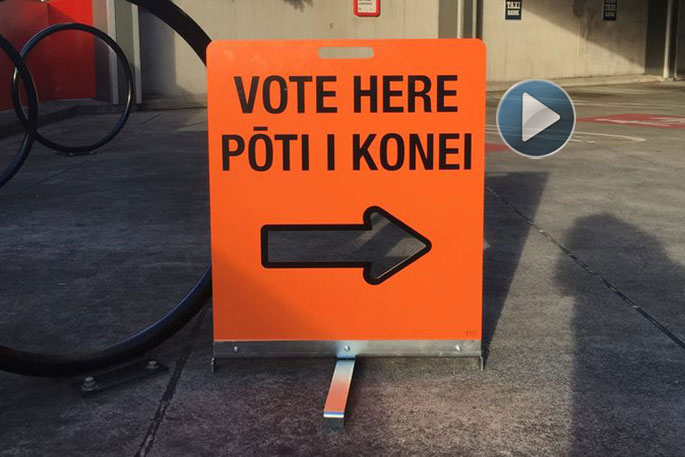 MMP - or mixed-member proportional - is the system used in Aotearoa to choose the people and parties who represent the country in Parliament.

Under MMP you get two votes every general election.

Let’s have a look at how they work.

A majority of New Zealanders voted for it - twice, first in a non-binding referendum in 1992, and again in a binding referendum at the election the following year. It was introduced in the next election, in 1996.

MMP aims to ensure that people will be represented in Parliament both by a person in their local area (electorate), and by a group (a political party).

How does it work?

The complexity comes in when trying to calculate how these votes translate into the seats available for members of Parliament (MPs).

Other things to consider

If a party wins more electorates than its share of party votes allows for, extra seats can be added to make up for the "overhang" and ensure the proportions remain correct. This has happened in three elections, with 121 MPs in 2005, 122 MPs in 2008 and 121 in 2011.

So who wins the election?

In contrast to some countries overseas, the United States for example, the election in New Zealand is not voting for the country's leader. People vote only for the parties and electorates.

But someone has to be in charge. Someone has to make sure the organisations doing all the management of the country - funding hospitals and schools, repairing roads and infrastructure, managing prisons - all that administrative stuff, and more, is being done properly.

This responsibility - and the power it entails - belongs to the government.

This can result in either a coalition - where the bigger party and smaller party form a government together and come up with a complete policy plan - or a confidence and supply agreement, where the smaller parties agree to support the main, governing, party on specific policies.

Under confidence and supply, the smaller party does not need to support policies that fall outside the agreement.

With 50 percent of the seats in Parliament, the governing party or coalition can decide what to change about how the country works and enact these decisions in Parliament.

The governing parties have most of the power. The parties that are not governing are known as the opposition, and it is their job to criticise and poke holes in the plans the government is putting forward.

Now now children....perhaps we should allocate voting power based on maturity. ; )

Somebody who calls Others "Dimwits" attacks me as being a "Leftie" because I don’t buy into his insane idea of how Democracy should work. For the record, my politics are strictly neutral; I vote Left and Right depending on the context and my primary concern is that whatever we do is fair to all sections of our society, without fear of favor. No more from me on this, as my position should now be clear and I consider it ungallant to have a battle of wits with the completely unarmed...

So you realise you have a class system, like everywhere. Only you call it a “hierarchy” lol. It won’t “correct“ itself. It never will, but I do enjoy lefties thinking they can change the world and busting a gut trying. What you can’t get your head around is that capitalism cannot be changed because humans want rewarding for risk and hard work. It always be so. Even the Chinese and Russians gave up on Socialism. You are not smart enough to realise this like all the lefties. And not everyone has a brain because apparently 25% of voters have misunderstood the Cannabis ref and what they’re voting for so that just proves my point yet again that dimwits have too much say, and you represent well. You’re correct, Labour will take some tax and waste it, just like the Council. But not much, I have plenty and always will.Ta

I have lived in your "motherland" and seen the Class system. We don’t have that here, although I would agree there is a new hierarchy emerging which is based on wealth. It will correct itself in time. People who "have a brain" (and it may surprise you to know that ALL of us do...) don’t actually NEED to be "given credit"; they are smart enough to know when they do what’s right and good for themselves and the society. It is not I who have a chip on my shoulder... Our system is not perfect, but it is certainly better than the one you are proposing. What a pity you aren’t smart enough to see that. Never mind, we’ll just take your taxes and waste them while you live here. Cheers!

You seem to confuse intellect with class. They are two separate things, though being upper crust can buy a better education, which helps. We all live in a class system whether you think it or like it. New Zealand certainly does. Private education is much more prominent here. As are second homes and boats. You’re naive to think it doesn’t exist in NZ. I don’t dream of a formal class system as you seem to think. I dream of a system where people who have a brain and contribute financially are given credit rather than being sneered upon. And given a bigger voice than dimwits. Because I’m afraid with your lovey dovey right on philosophy we are going down the tubes, both here and globally. You seem to have a chip on your shoulder. I’ll be staying thanks, the weather is better. And that’s about all.

MMP is designed to ensure that even minorities get a voice. It is better than the first-past-the-post we used to have and it ISN’T complex, if you sit down calmly and read the above. As for following the "Motherland" as Slim advises, it ISN’T the motherland any more for most NZers, they shafted us without compunction by entering the EEC, and if you look at their current situation, you wouldn’t want to be there. (I say this having lived there many years and considering myself an Anglophile...) I guess Slim Shady will be going back as soon as the brakes are off... His dream of a Class system based on IQ is probably more likely to happen there than it is here, but I watched them demolish a Class system based on Old School ties, and I give them credit for it..

An un-necessarily complex system - then that’s only my opinion.

Instead of continually trying be different, and failing, NZ should adopt the Motherland’s system. First, we need a smaller number of MPs - it is just ridiculous how many there are and is just a gravy train full of nodders. Second, we need an upper chamber made up of the bright and successful and experienced. Obviously not Lords because you don’t any but you have Sirs and Dames. Your John Key and Helen Clark types and others from business who have shown they have what it takes to run the place. This Chamber would be the handbrake on stupid ideas from stupid coalition governments, dictated to by egomaniacs who get 5% of the vote. Lastly, we need voting weighted according to intelligence and financial contribution to the coffers. We then have a chance of “moving forward” as Mary Poppins likes to put it. Sorted. Jim’ll Fix It.

We should adopt the German system.The party with the most votes gets the first opportunity to create a government.Our system is against the grain of of all competition