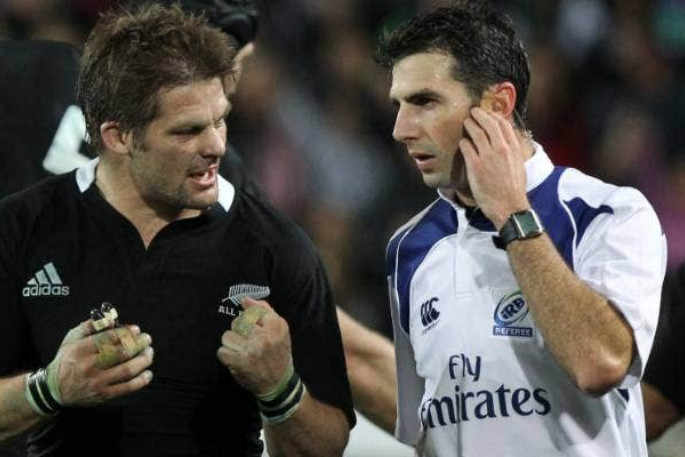 The Tauranga-based referee who presided over the All Black’s history-making World Cup final victory in 2011 is coming out of retirement to lead an all-international referee line up for next week’s epic Pack the Park match in Invercargill.

South African whistle-blower Craig Joubert was involved in several momentous rugby matches throughout his 69-test international career, including the 2011 final between the All Blacks and France at Eden Park, but will be making his debut on Rugby Park on October 17.

He’ll preside over a Pack the Park match featuring a host of famous rugby names, as well as close friends, family and supporters of the late Blair Vining, who became a heroic advocate for more equitable cancer care throughout New Zealand following his diagnosis of terminal bowel cancer.

Craig, who these days is based in Tauranga, will be joined by fellow former international referees Keith Brown and Vinnie Munro, while Paddy O’Brien will control the sidelines.

Pack the Park has been created as a thanks to Otago and Southland for supporting the fundraising efforts for Blair and wife Melissa Vining’s legacy project, the Southland Charity Hospital. It will also commemorate the first anniversary of Blair's death.

Craig was in charge for 69 tests, including the Eden Park thriller in 2011 and the 2012 Grand Slam decider between Wales and France, as well as more than 100 Super Rugby games.

He retired from refereeing 15-a-side matches at the end of 2016 to take up a role as a Referee Talent Development Coach at World Rugby.

Paddy O’Brien said Pack the Park deserved to have a quality lineup of officials to match the occasion.

“We are looking forward to it. We’ve got four test referees involved, which is pretty unique really. We are all starting to age, although Craig refereed at the Olympics four years ago and is still in pretty good nick,” says Paddy.

“Paddy just phoned me up and asked if we needed any help and then he generously offered to help, and he arranged for Craig to fly down,” says Melissa.

Pack the Park will be followed by gala dinner The Aftermatch at the spectacular Bill Richardson Transport World. Master of ceremonies, television personality Scotty ‘Sumo’ Stevenson, will preside over a sold-out crowd of almost 700 people. The event sold-out just hours after tickets went on sale.

Pack the Park will be the curtain-raiser to the Mitre 10 Cup fixture that will see Southland take on Taranaki. General admission to the terraces is free and does not require a ticket.

Grandstand tickets are also available. Tickets will give punters entry to both the Pack the Park game and the Mitre 10 Cup fixture following it, which will see the Southland Stags take on Taranaki.

Tickets are now available at ILT Stadium Southland or www.ticketek.co.nz. Meanwhile, sales will also be available on the day, subject to availability.