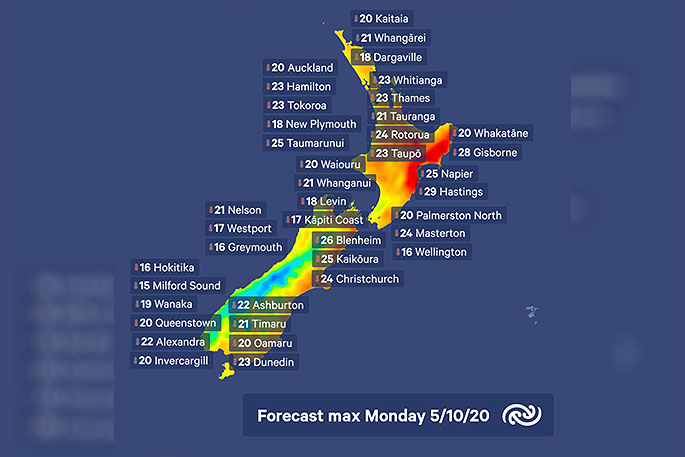 A ridge of high pressure is in place over Aotearoa, leading to mainly fine conditions.

Strong northwesterlies ahead of a front affect eastern parts of southern and central New Zealand early this week and MetService has issued warnings and watches.

"The front then brings rain to the west of the South Island on Monday and Tuesday, and a few showers in the east," says the MetService.

"The North Island is in for a brief spell of showers on Wednesday as the front goes through."

Behind this front is a cooler airmass, which brings a drop in temperature with the front. A new ridge establishes on Friday but is displaced by another front during the weekend.

This changeable pattern is typical of the season.

“Spring is the windiest season. Winds are driven by temperature difference over a large scale," says MetService meteorologist Andrew James.

"At this time of year, the northern part of the southern hemisphere warms up much faster the Antarctic, leading to the largest temperature differences and hence the strongest winds.

"These strong westerlies move fronts over New Zealand at a rapid pace, so spring is typically changeable." 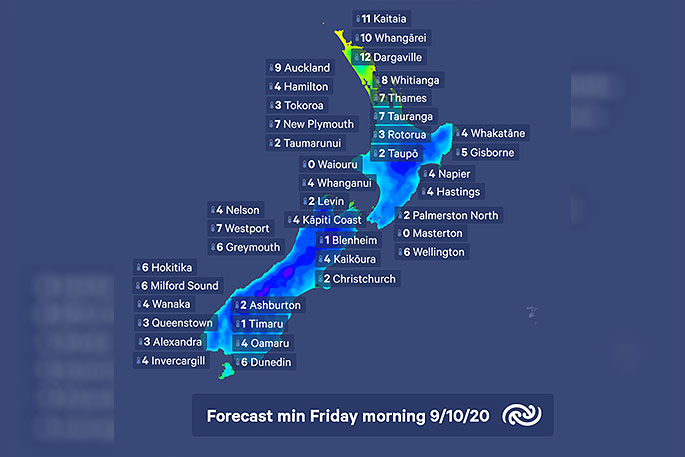 The front brings rain to the west of the South Island omorrow, and Severe Weather Watches have been issued for heavy rain about the ranges.

The Southern Alps provide sheltering for the east coast, so Cantabrians should expect just a few showers today.

The front weakens rapidly as it moves north, so the North Island is only in for an hour or two of wet weather – starting for Wellington after dark on Tuesday and affecting Auckland on Wednesday afternoon.

“A front is the boundary between two airmasses” says James, “warm air currently over the country has allowed low cloud and fog to plague the mornings from about Whanganui northwards. Cooler air moves in with this front and a ridge develops - the perfect setup for frosty mornings. Growers in both islands will have to be alert from Friday morning.

“The chilly start might be bit of a shock for Kiwis who had the shorts out after the warm weekend – especially for those in the east, where the strong northwesterlies have driven up the temperatures. Blenheim is expected to reach 26 today and then drop to 1C Friday morning, it is a similar story right up the east of both islands”