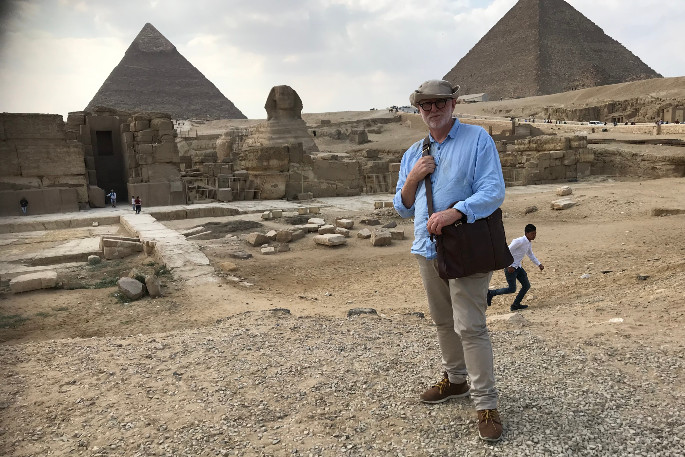 He’s trailed behind Edmund Hillary in the mountains of Nepal and followed in Charles Upham’s footsteps through Europe.

Cartoonist Tom Scott is now bringing his wit and experience to Tauranga for the Escape Festival this month.

He is launching his book Searching for Charlie but was happy to share his observations on war, politics and humour in advance for The Weekend Sun.

Upham is someone he has admired for a long time and his opinion of the man and his deeds only grew while researching the book.

“Facism - Nazi Germany - was a great evil that had to be stopped and they stopped it and New Zealanders played a great role in the Western Desert.

Tom has fired more than few salvos himself, in a cartooning career that started at The Listener in 1984.

He is eyeing up a return to the same publication very soon.

Everyone from former Prime Minister Rob Muldoon to the current PM have been fair game.

He says you are only ever “24 hours away from shame or redemption” as a cartoonist.

“You have got to think of a good idea every day and then do of a good drawing to go with it. And then if you can’t do it you feel sick at heart for 24 hours but you get another chance.”

He says there is plenty of material to work with, with national and international politics and he has had a few ideas, including Donald Trump standing outside The White House with writing on the street saying ‘orange lives matter’.

Or, in a nod to the 1979 American war film Apocalypse Now, which features a solider standing on a beach saying how much he loves the smell of burning napalm in the morning while the jungle burns behind.

“I want to do a cartoon with Australian bush on fire and a picture of Scotty Morrison holding a koala with the words: ‘I love the smell of cooked koala in the morning’.”

He misses the satire of the likes of Billy T James and John Clarke but says politicians probably get away with less now than they ever did, thanks to smart phones and social media.

For more details about Tom’s event and others just head to the Tauranga Arts Festival website. The festival is on October 17-18.