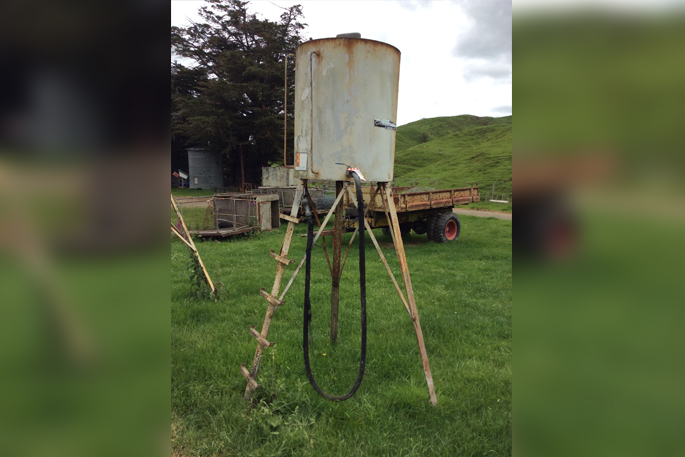 Farmers are being warned that poorly maintained tripod tanks are a serious health and safety risk to fuel users.

This safety alert comes after a fuel tanker driver was seriously injured on a farm in Onewhero back in April where a tripod overhead tank collapsed while he was filling it.

WorkSafe says the root cause of the collapse was significant rust corrosion on one of the tank legs. Farm implements close to the tank also contributed to the driver’s injuries.

“No farmer wants to be responsible for an incident like this happening on their farm,” says Al McCone, WorkSafe agriculture lead.

“On the farm, farmers are responsible for keeping themselves, their workers and other people safe and healthy. This includes making sure tanks on the farm are safe and won’t cause an incident involving harm to themselves, workers or others.”

He says there advice is to check all fuel tanks and support structures for signs of corrosion and metal fatigue, and where these are identified, consider replacement options.

Farmers should also check to make sure tanks are properly secured to a flat foundation and ensure the work area around each tank is safe with a clear path free of obstacles.

“Maintenance on existing tripod tanks is limited to painting, replacement of hoses, valves and lost fixings (e.g. bolts, pins), work to ensure that the tripod stand is firmly attached to both the tank and the ground, and making ladder rungs safe.

“It’s unsafe to install new stands on tripod tanks. Installing a new stand will invalidate the original design approval – these approvals make sure any new tanks manufactured are safe.”

Fuel distributors have responsibilities to make sure they are doing everything they can, so far as reasonably practicable, to keep themselves and other people safe and healthy, says Al.

“The Fuel Distributors Industry Safety Committee has issued a notice that they will not be filling tripod fuel tanks.

“The committee has taken this approach due to the number of incidents involving the tripod fuel tanks and the hazards associated with these aging tanks.

“Essentially, it is up to the discretion of the fuel provider as to whether to fill the tanks or not. This is to ensure that they are taking reasonably practicable steps to ensure the safety of their workers.”

He says most of these tripod tanks have reached the end of their life.

“Unless it is obvious, or evidence is provided that these tanks are in good condition, it’s best to replace them.”

Approval for manufacturing tripod fuel tanks was cancelled in 1996. At the time, agreement was reached that farmers could use existing tripod stand tanks until the tanks reached the end of their working life.

“If farmers have any questions or need assistance, they should contact their local fuel supplier team who can help them ensure their operational environment is safe.”

As a trades person I’ve worked on many BoP farms. "Preventative maintenance" is an unknown practice on almost every farm. It’s a wait ’til it breaks environment.