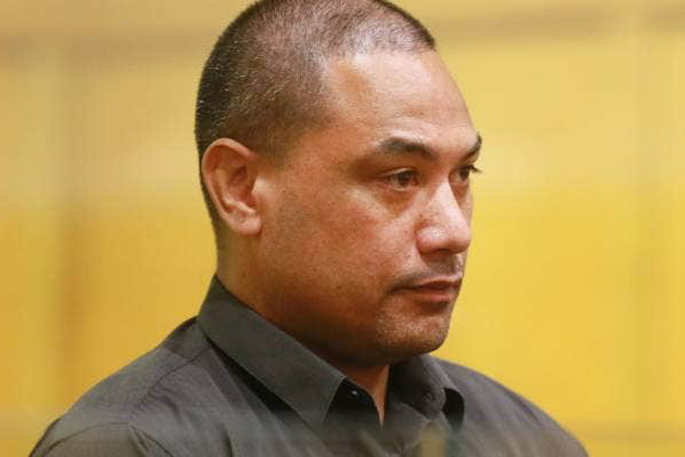 Tewi Savage, pictured at an earlier appearance, was sentenced on Tuesday after being found guilty of murdering his own daughter. Photo: Mark Taylor/Stuff.

A father who killed his two-year-old daughter after walking into a river with her when he became angry at a relationship breakdown will spend at least 14 years in jail.

Tewi Savage, 35, was sentenced at the High Court in Rotorua to life imprisonment on Tuesday after he was found guilty of the murder of his two-year-old daughter Arnica Savage in March, a verdict he challenged the jurors on telling them “you got it f...ing wrong”.

Savage, of Te Mahoe, had taken his daughter into the Rangitaiki River, after becoming angry at the breakdown of the relationship with Arnica's mother Santana Moses.

He was discovered naked in blackberry bushes saying he'd "f..... up" upstream from where his daughter's body was found snagged in trees on July 1, 2018.

“It’s like I’m waiting for my time to end,” Moses said.

She said she drinks and smokes much more now as “it helps to numb the pain, but when she wakes up it’s still there”.

“She wonders when she’ll get peace.”

The 13-year-old brother said he now has trouble sleeping and suffers from nightmares, and has been affected by seeing the impact of the death on his mother.

“She has changed from before,” he said.

Pollett described the offending as a breach of trust “at its highest level”.

Savage’s lawyer Shane Tait then asked Justice Paul Davison whether his client could address the court.

Savage stood in the dock and speaking in Te Reo, then English, his voice trembling at times, said “just sorry”.

“I couldn’t express it in English words but those that need to hear it can hear it, it means more to me and their ears coming in that language.”

Tait also described his client’s sense of shame for what he described as “one of the gravest offences in the law book”.

“He was suffering from an undiagnosed bi-polar condition at the time.”

Tait said that while not enough for an insanity verdict, it should be considered by the court.

Justice Paul Davison said he had read the victim impact statements and “those who have prepared them, including Ms Moses, have endeavoured to express their deep sense of loss at the death of a beautiful child”.

“The pain, sense of loss and sadness that you are experiencing cannot and will never be alleviated by the courts imposing a sentence on Mr Savage today.”

He also referred to evidence given by Savage’s mother about a family meeting where she described her son as behaving as if there was “a battle underway for your soul between the devil and God”.

Moses had also told Savage at this meeting of her intention to move to Australia.

“Despite any mental turmoil your actions had the tragic consequences of causing her death. . . all children in the care and custody of adults should at all times be kept safe and secure,” he said.

“Her life was taken from her by the actions of her father, someone she loved and adored.”

Davison also noted Savage’s mental health issues, which he said fell short of insanity but were to be factored in in his sentencing.

He referred to Savage describing to a psychologist how he took his clothes off and danced naked in front of Arnica at the river “to show his humility”.

“In no way can it be seen as rational thinking,” Davison said.

He said a 17-year minimum period of imprisonment would be manifestly unjust, and that Savage’s remorse and shame were genuine.

“The tragedy of Arnica's death will be an ever present burden on you for life,” he said.

Crown Prosecutor Richard Jenson had argued at trial that Savage was in turmoil over the separation with his estranged partner and walked down to the river where he decided to "end it all".

He took off his clothes, grabbed Arnica and took her into the river where she was asphyxiated - either by constricting her breathing, being held under the water, or simply by letting her go into the fast flowing chilly waters.

But Tait had contended that Savage was suffering from a disease of the mind due to an undiagnosed bipolar disorder and had no murderous intent.

As the jurors heard earlier in the trial, Savage, an electrician, and Arnica's mother, Santana Moses, had been together for 14 years and had five children together. Arnica was the second youngest.

The pair had separated and Moses was living in Whakatāne and in the early stages of a new relationship. The pair had shared custody of the children.

n the days leading up to July 1, Savage had found out about the new relationship and was struggling to cope.

"She's drowned, she's dead, I drowned her," Jenson had told the jury.