Restoring land in the Bay of Plenty 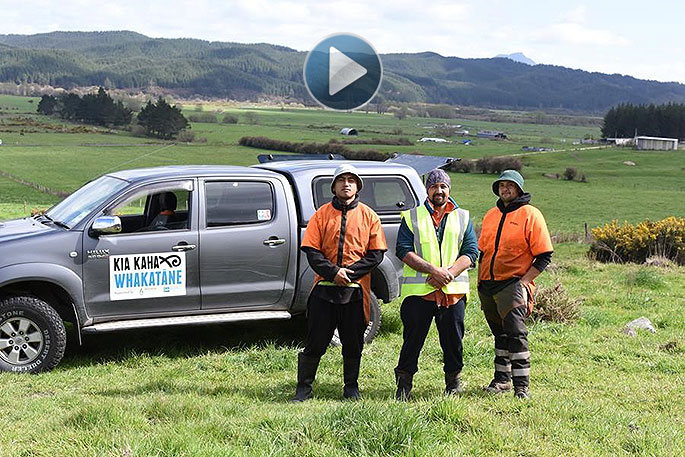 The new recruits are among 220 people in the Eastern Bay of Plenty who have been helped back into employment through the Provincial Growth Fund’s $8.2m investment in the Whakatāne District Council led Kia Kaha Whakatāne project.

The initiative is a suite of activities that are delivering roading, infrastructure and environmental projects in partnership with the Bay of Plenty Regional Council to provide urgent economic relief, particularly for those who have lost jobs through COVID-19.

Ismael Mitai and Clifford Merriman own Waikakariki Murupara, contracted by Regional Council to work on removing wilding pines on a section of privately owned land in Waiahou.

They were a pest plant because they outgrow and shade out native vegetation and prevent native flora being able to grow and thrive.

Through the project, Waikakariki Murupara had been able to offer two men, Kerehou Merriman and Brandon Toki, employment and training in chainsaw handling and maintenance and level three-tree felling. The pair also achieved a first aid certificate.

Mitai says Waikakariki Murupara specialised in native planting restoration and he especially wanted to inspire and teach others around him to care and assist papatūānuku (mother earth) back to her original state.

“Both the recruits whakapapa back to the area, so the work we are doing is only deepening their understanding of their own whenua and where their ancestors had come from.”

Mitai says that in turn gave the workers recognition from their kaumātua and elders and knowledge to pass on to their own tamariki and mokopuna in the future.

“That’s the aim of this business, to give the current and future generations what we had when we were younger.”

Kerehou Merriman says he's grateful for his new job and the opportunities it was providing.

“What I love the most is that I am working at home, and I’m taking care of my whenua. It is not just for the sake of myself but for my family and friends and our future generations too. I’m pretty proud.”

Merriman says after his last job finished, he found himself on a downward spiral.

“I was heading down a bad road, and doing things I never thought I would do. But I was lucky enough to get a text from Ismael asking me if I wanted to join his crew, I haven’t looked back since, I love my job.”