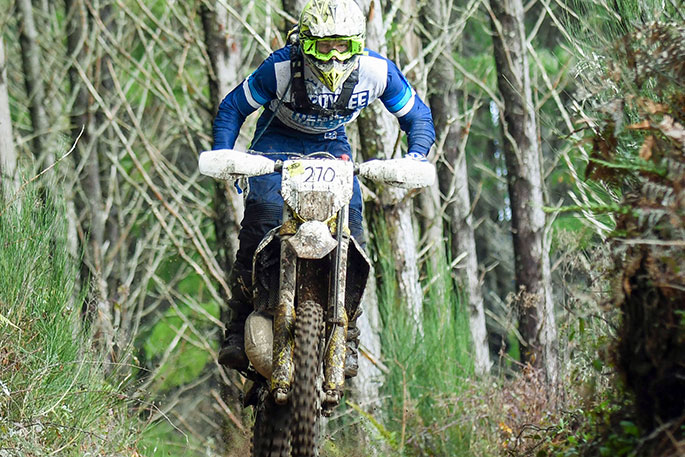 It always takes a special kind of athlete to win the Husqvarna Hard Adventure Enduro, so it's just as well that so many special riders have entered again this year, including a pair of two-time former series winners.

The Husqvarna Hard Adventure Enduro typically attracts the country's elite dirt bike riders to the Central North Island over Labour Weekend each year and organisers are convinced this year's adventure will be the best one yet.

It is expected to be tough, with plenty of obstacles lined up to sap the spirits, trap, trick and wear down even the most experienced of dirt bike racers.

Staged in forestry land around Tokoroa, Putaruru and Taupo, it will take place over two-and-a-half days over Labour Weekend – starting Friday evening, October 23, and winding up on Sunday afternoon, October 25 – and, when the bike engines are switched off, or the riders cry "enough", late on Sunday afternoon, the eventual winner will have earned every accolade that could be heaped.

The event is designed to be difficult, but also achievable for the grade that a rider has entered, using a similar format to the notorious Red Bull Romaniacs international hard enduro that is held each year in Romania.

"Day one starts at Litchfield, north of Tokoroa, and finishes about 10 kilometres south. Day two starts near Tar Hill and travels across the forest to Waipapa Dam, where the riders will have their lunch break before heading back across the forest to the Bull Ring at Ataimuri. There are more than 300kms of trail for the two days of off-road riding."

Kiwi international Chris Birch won the inaugural event outright in 2016 and he's entered again this year, surely putting him among the favourites to win a second time.

Cambridge builder Dylan Yearbury had been forced to withdraw from the 2016 event when grit got into his eyes and caused them to painfully swell up.

However, for the 2017 edition, Yearbury returned to "settle some unfinished business" and he did just that by winning it.

He backed that up by also winning the event outright in 2018.

Thames rider Birch won again last year and, as a former winner of the iconic international Romaniacs event (back in 2010), it further rubber stamps his status as a favourite to succeed at home again in 2020.

Each day's track over Labour Weekend will be different, will be up to 150-kilometres in length and will feature Gold, Silver, Bronze grade sections and, as a new added feature, Iron-graded sections as well.

"This event will not be a typical New Zealand hard enduro; it will be real Adventure Enduro, and each grade will be set to give riders a real sense of adventure, as well as testing rider’s ability to complete the grade that they have entered."

Clarke explains that riders would follow a Global Positioning Satellite course that is re-set daily and uploaded to their handlebar-mounted GPS device.

It kicks off on Friday with riders signing in and then undergoing motorcycle and equipment scrutineering from 3pm.

Starting in the SATCO logging attachments yard in Tokoroa at 5pm will be the event "prologue", with riders tackling a man-made course to determine qualification and starting positions for the following day.

"The riders can expect two days of hard riding on Saturday and Sunday that will push them to their limits," says Clarke.

The Gold and Silver class riders will be pushed hard with two big off-road days planned.

"We have some new and exciting tracks for both grades that will be challenging but also some pretty cool places to ride."

For the Bronze and Iron grade riders, there is more of emphasis on adventure than on hard enduro.

"The Bronze grade is two days of enduro type trails with the odd log crossing and steep down-hills thrown in for good measure, but nothing too silly.

"The Iron grade has been introduced this year and designed to suit trail riders, individuals who want a bit more than just a normal trail ride. Each day the Iron grade riders will cover 100kms of the best trails we have.

"This event is the closest type of event that riders will get to compare to the Romaniacs, but it is only two-and-a-half days' duration.

"One thing to remember about the Husqvarna Hard Adventure Enduro is that you just can't rock up on the day and plan to ride. To ride this event, it takes a bit of planning and training."

There are about 300 kilometres of trail and tracks waiting for the riders, with section names hinting at what lies ahead – names such as "Log Jam", "Keep your Lunch Down", "Switch-back City", "Team Up", "Silver Last Climb", "Rock Garden" and "Romaniacs Ridge", while riders will possibly also have to take their bikes on a Flying Fox across a river.

An indication of just how challenging the racing might be is in a note to riders that they must also carry "survival equipment", including a cell phone, first aid kit and survival blanket.

Some of the leading riders listed among the entries include defending champion Yearbury, Wainuiomata's Jake Whitaker, Helensville's Tom Buxton and New Plymouth's Tony Parker, to name a few.

These riders are expected to be among the frontrunners, as long as the treacherous course doesn't claim them first.