Taking the sting out of summer 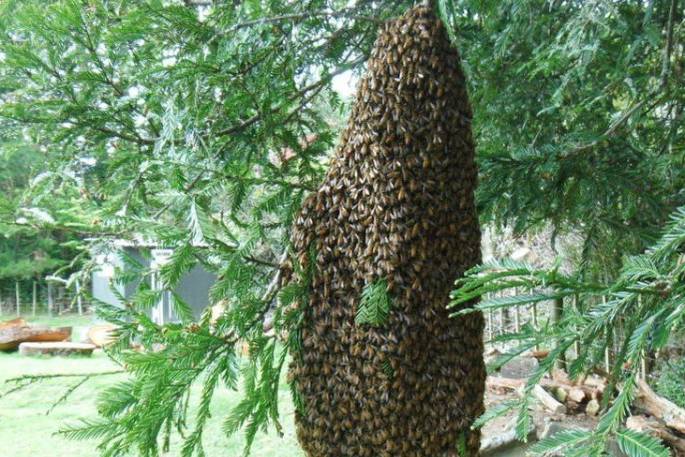 An unusually large swarm of bees. They more often range from the size of a softball to a basketball.

Springtime, with its longer warmer days, is swarm time for bee colonies, says Chris Mitchell from Seaside Bees in Papamoa.

Between now and Christmas the emergence of new virgin queen bees in existing hives will see some colonies split with one queen and a large group of workers flying off to establish a new colony.

Swarming is a natural method of hive propagation that occurs primarily in response to crowding within the original colony.

The departing swarm may travel a relatively short distance initially, before ‘parking up’ somewhere temporarily while scout bees look for a suitable permanent location to build a new hive.

It’s at this ‘holding’ point you might discover a swarm of bees hanging off a tree in your backyard.

If captured at this early stage of migration wild swarms can be successfully re-homed into a purpose-built standard beehive box for a long happy career in beekeeper-managed honey production.

Swarms left to fend for themselves don’t always have such a happy ending. Parasites like the varroa mite can wipe out a hive in the wild within 18 months, Chris says.

They will arrange one of their volunteer collectors to rescue it and give it a hive.