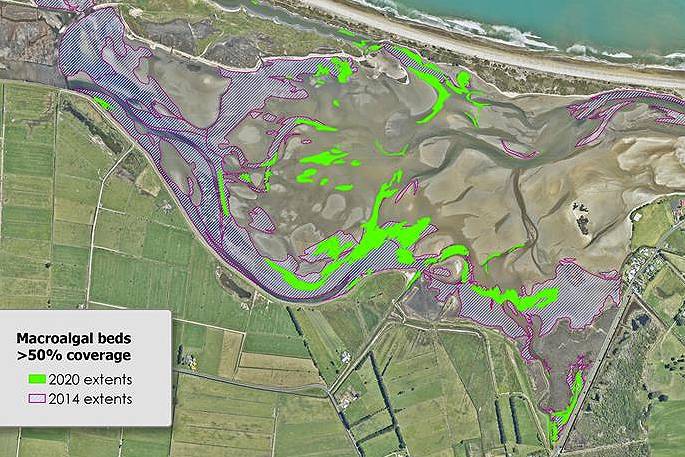 A map showing some of the improvements. Image: BOPRC

This is according to Bay of Plenty Regional Council’s latest report on findings from its environmental monitoring work in the estuary.

Bay of Plenty Regional Council Senior Coastal Scientist Stephen Park says they’re seeing a reduction in mud and algae, and the return of sandy areas, shellfish, birds and other marine life as a result of work completed in 2017 to restore tidal inflows and wetlands around Papahikahawai.

“It’s too early yet to confirm positive results from the Kaituna River re-diversion and Te Paika wetland creation work that was opened in February this year, but salinity and oxygen levels in some parts of the estuary are starting to look better already."

Land drainage works carried out in the 1950s had cut off tidal and river inflows, and caused an ongoing decline in the health of Te Awa o Ngatoroirangi.

Since 2014, Bay of Plenty Regional Council has been helping to reverse that decline by delivering work on the ground in partnership with tangata whenua and landowners including Papahikahawai Trust to restore wetlands, tidal flows and river inflows in the estuary.

The Regional Council is also trying to incorporate local knowledge into its ongoing estuary monitoring work.

In his report, Stephen says by the 1980s, Maketū Estuary had lost at least 34 per cent of its water holding capacity (volume) and 95 percent (160 hectares) of its estuarine wetland areas due to land drainage, reclamation and associated sediment build-up in the area.

Parts of the estuary had also become stagnant and choked with algae mats and slime.

“That meant a significant loss of fish breeding areas, and habitat for shellfish, birds and other marine life.

“But now, 45 hectares of those important intertidal habitats have been re-established, and almost all of the algae mats that were clogging and removing oxygen from the upper estuary are gone.

“Shellfish including tuangi (cockles) and titiko (mud snails) have been quick to return to the areas we’ve restored, as well as large numbers of worms, crabs, fish and birds. Our monitoring results are showing significant increases in the number, size and variety of species that live in the estuary at many locations.

“Our staff and other locals have also recently reported seeing threatened bird species such as moho pereru (banded rail) and matuku (Australasian bittern) in the new wetlands along the south-western edge of Papahikahawai Island.

“It’s exciting to see signs of recovery so quickly. Our monitoring work to date suggests that estuary health will keep improving in the years to come."

A full copy of the monitoring report and further information about Regional Council’s work to improve the health of Te Awa o Ngatoroirangi Maketū Estuary is available at www.boprc.govt.nz/kaitunarediversion