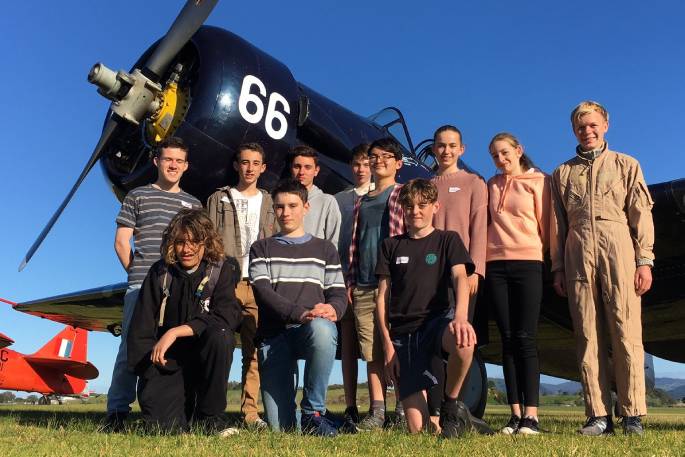 Tauranga Aero Club Young Eagles have had their first foray into an historic aircraft.

It was a big day for Warbird Aviation who recognised the 80th anniversary of the Battle of Britain last Sunday, as well as introducing the young aviation enthusiast to a warbird.

“The day dawned with what aviators call ‘wing commander weather’ – in laymen’s terms it’s means a sky devoid of cloud and light breezes – just perfect for an introduction to warbirds and formation flying for budding aviators too young to hold a license, but possess a passion for slipping the surly bonds of earth and turning the planet into a stunning panoramic.”

The Young Eagles programme is run under the Royal NZ Aero Club for 13-17-year-olds. They meet once a month for a flying experience or ground-based aviation activity.

Sunday’s flight to Matamata was not only a highlight for young flyers, but also the programme helpers as some were treated to a rare opportunity of flight in a 1930s vintage aircraft.

The flight was a collaboration between the club and Classic Flyers.

First call of the day was a briefing, which ensures everyone is proficient at hand signals, flying procedures, timing, and how to navigate multitude aircraft to the same place without swapping paint. 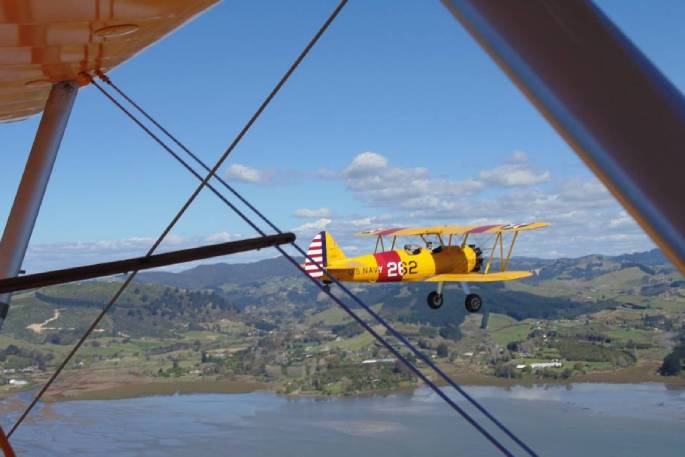 Olivia Pratt gets a nice perspective of Marty’s Stearman in formation. Photo: Supplied.

“The most rewarding part for me is hearing the excited chat on the intercom from the lucky young aviator behind me, which seeing the exuberant look on their counterparts face staring back at us from the Perspex just a few metres away,” says Janelle.

“The warbirds arrival into Matamata airfield was via a ‘Buzz n Break’ procedure, in our case with the smoke turned on.

“Not only were the 16 young eagles impressed, but plenty of vehicles on State Highway 27 and a few locals swung into the front gate to inspect the proceedings and observe a flying museum sunbathing on the grass.”

During afternoon tea at Matamata, viewers also got an introduction to aerobatics, and two lucky recipients got up-close-and-personal, after winning 10 minutes of aerobatics in a Yak 52 Russian warbird trainer or yellow CT4 Airtrainer.

While nine young folk had sausage rolls, winners Olivia Pratt and Flynn Clark got barrel rolls! Both landed with their lunch still contained internally and even headed straight to the snack table upon safe landing.

Adjoining the Yak on the flight line was another of its ilk, two North American Harvard’s – the noisy ones that leave smoke on airshow day – three Boeing Stearman biplanes and the Airtourer.

“Rounding out the gaggle was some aero club members private aircraft, which are kindly donated each event complete with competent owner pilots,” says Janelle.

Young Eagles pilots are vetted before they start flying to ensure only safe outcomes and happy landings.

Completing the airlift were a Cessna 180 – sometimes referred to a bush plane – three owner-built aircraft, two RV’s which are sleek and fast and a Murphy Super Rebel which is a short take-off and landing minivan.

Before long it was time to tuck the wheels up and shred air back to Tauranga, this time deviating north and scaling the Kaimai Ranges at Katikati before turning down the scenic Matakana coastline for The Mount.

“With a new voice on the intercom and a new young face staring back at me it was renewed excitement all round, again cumulating in a smoke on ‘Buzz n Break’ recovery to the home runway,” says Janelle.

But there was more when the group got home - local aerobatic pilots Murray Rogers and Steve Geard put on spirited aerobatic displays; Murray in the club’s Cessna and Steve in his Yak 55.

The aero club deck was crowded with faces drawn to the smokey trails and aeroplane defying normal flight characteristics.

“Too soon though the sun hit the horizon, the warbirds returned to Classic Flyers hangers, and 16 teenagers enthused by the scent of old leather, engine oil and some unnamed vintage aroma, got stuck into the provided barbecue dinner... as you’d expect!” says Janelle.

For more information on the Young Eagles programme, visit: www.flytac.co.nz/young-eagles

It was certainly a heart-warming sight to see the three yellow biplanes as they headed over to Matamata that morning. A perfect day for them as well. Brilliant to see them in the air.