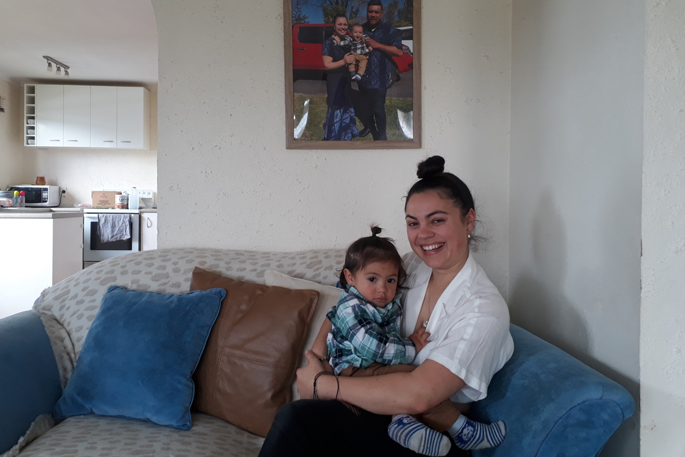 Constance Ready and one of her sons Remaliah Usa-Pusa in their Rotorua home. Photo: Matthew Martin/SunLive.

“Am I just going to allow my authenticity, my uniqueness and my power as a woman to be slowly eroded, or am I going to do the most terrifying thing and leave Gloriavale to find myself?”

That was the question Constance Ready asked herself just before she fled Gloriavale in 2016.

Now, the 26-year-old will open up about her experience of growing up in the Christian community.

She is set to speak alongside a panel of other leavers tonight in Tauranga at the 'Unmasking Gloriavale' event.

"The idea of the church being perfect, beautiful and good came crashing down all at once for me,” says Constance.

"I realised the leaders were manipulating scripture to control people - there was a very deep sexual undercurrent in the place that kept women suppressed, kept them victim. This empowered men to do whatever they wanted.”

Constance says gender roles were ingrained into them from a very young age.

“As a six-year-old girl, you are put into the mould of what the rest of your life is going to be. You are taught to be very respectful to men and you are taught how to be a mother.”

“Women are just so amazingly incredible, but in Gloriavale they are made to feel like they are only worthy for their ability to have children,” she says.

A turning point for Constance was after her 14-year-old sister Prayer Ready, who had down syndrome, died in 2015.

“We weren’t allowed to grieve, to work through it, to process it.

“After her passing, they went out of their way to make me forget her. They would say ‘isn’t it a blessing that she has passed’ and that it was a relief for mum and me. They showed such little care – and that was the real shake-up for me.”

When Constance fled Gloriavale in 2016 she first turned to a nearby farmer for support.

"I ran away to a farmer who lives a 20-minute drive from the community. I knew him because my two older brothers had worked on his farm. I knew he was a good person, and that he would help me."

Eventually, she got in touch with extended family who lived in the North Island.

"I moved up to Taupo, then I decided to move to Hamilton to attend Waikato University to do a Bachelor of Arts majoring in Te Reo Māori.

"I’m part Māori but I wasn’t raised with any knowledge or any history.

"I wanted to dig deeper – it was about discovering more about myself as well. I just wanted to find my connection to Te Ao Māori and to soak it all up – it was an unreal and amazing experience."

Constance, who now lives in Rotorua, describes her first year of freedom as "super buzzy".

"The people I first met on the outside were so kind and so caring. And I had only ever been told that everyone was horrible and selfish."

The hardest part of leaving Gloriavale was leaving her family members behind, she says.

Constance's mum and five siblings still live there, but her dad and six other siblings have since left.

"They make it super hard for us to visit our family. We don't call mum to make life easier for her - but it's sad we don't have the opportunity to keep in touch.

When Constance was pregnant with her first boy, she was eager to have her mum attend the birth.

“I found the idea of going to the hospital scary – so I wanted my mum there to make me feel like everything was OK.

"But she was told that if she attended my birth then she wasn’t allowed back inside the community."

The mum of two says she is sharing her story because she wants people to know what it's really like to grow up inside Gloriavale.

"The general public has an image that Glorivale is a happy, lovely place in the country where the community is living their best life.

"There needs to be more public awareness around the fact that this place is a cult and it takes away human rights from people."

We have freedom of Religion and that is a good thing. I don’t want Gloriavale closed any more than I would want an Ashram or Monastery closed. As long as people need a religion, they should be allowed to follow it, PROVIDED it does not mentally or physically harm others, and it is not breaking any Laws of the land. People who have left, simply demonstrate that there are no walls and it didn’t work out for them. If they feel "damaged" by their experience, that is regrettable, but it was a choice they made. There are a lot of happy people in Gloriavale. When there stops being, it will fold, just as previous attempts by their founder folded. Don’t be too quick to point fingers; ALL religions have their flaws and so does Atheism.

This is NOT a Christian community and neither is it practicing Christianity. It is hiding under the umbrella of ’christian’ and mis quoting scripture to suit their own brainwashed beliefs. It is so sad to hear the stories of people who have managed to leave.