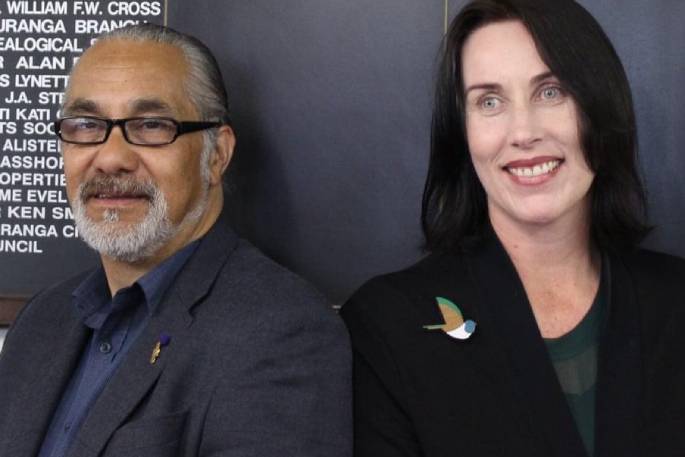 Tauranga Heritage Awards co-recipients Dean Terekaunuku Flavell and Fiona Kean standing in front of the Roll of Honour that now bears their names, and which is held in the Brain-Watkins House Museum. Photos: Debbie McCauley.

The Tauranga Historical Society has announced the winners of its annual Tauranga Heritage Award.

This year marks the 20th occasion of this important award that recognises by their actions, the contribution of an individual, group or organisation to the history of Tauranga by acts of protection or preservation.

It is awarded by the Tauranga Historical Society in conjunction with Tauranga City Council and is a wonderful opportunity to celebrate heritage excellence in Tauranga.

This year two award recipients were honoured during an afternoon tea at Brain Watkins House today, attended by more than forty people.

Mistress of Ceremonies was President of the Tauranga Historical Society Julie Green, and Mayor Tenby Powell was the keynote speaker.

The awards were set to happen earlier this year, but were delayed due to the COVID-19 lockdown, says Debbie.

"Both Dean and Fiona have not only been entrusted with important historical objects and their conservation; but have gone much further by sharing the stories of those objects with the community. Much of this work is behind the scenes, but the public were able to view some of what they do through their hugely popular ‘From Tauranga to the Trenches’ mobile exhibitions.

"With the innovative use of customised steel shipping containers, they created 10 exhibitions for the 100th commemorations of World War I, bringing alive the experience of Tauranga soldiers and their families during this time.

"Dean and Fiona collaborate widely with others and freely share their time and resources. Both are dedicated to sharing their knowledge, such as during the taonga and conservation workshops that Dean delivers and during Fiona’s 11 years as editor of the Bay of Plenty Historical Review."

Dean is a recognised artist and Tohunga Whakairo or master carver, and he is also chairman of several groups working for the protection of our environment and our history.

He has taken charge of the restoration and upkeep of Te Awanui, our city’s ceremonial waka that was carved from a 300-year-old kauri tree almost 50 years ago.

As Dean has said, "Te Awanui is a symbol of a community, of how two people, Māori and Pākehā came together".

During Matariki 2020, Dean put together an exhibition, ‘Te Rākaunui – Te Rākauroa’, that explored the traditional tools and philosophies of tangata whenua via the oral passing down of traditional tool making and purpose related to traditional forms of horticulture practised within the local area.

The exhibition was made up of tools from Dean’s personal collection.

"One of the things as a carver I like to do is recreate old tools and teach the young ones how they were used," says Dean.

A quiet and humble leader, Debbie says the Tauranga community is unaware of exactly how much Dean is involved in.

"But we know as chairman of the Ngā Poutiri Ao ō Mauao joint management body, he is quoted as saying, ‘This is a great example of how iwi and Council can collaborate by engaging early, face-to-face, and with the right information.’

"As chairperson of Te Maru o Kaituna River Authority, he has explained their vision of seeing, ‘the Kaituna River in a healthy state, where it is protected for current and future generations.’

"He is also chair of the Tapuika Development Trust chair and Makahea Marae, and these are just the things we know of." 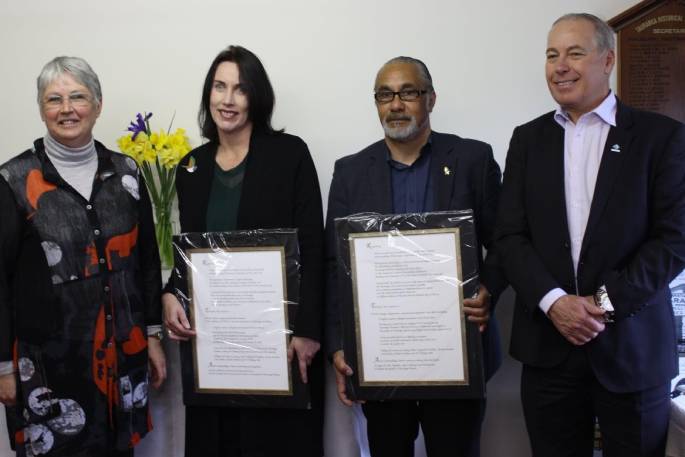 Fiona has contributed history articles to the Tauranga Historical Blog for the last seven years. She also worked on a special edition of the Historical Review for the 2014 Battle of Pukehinahina commemoration, the book ‘From Tauranga to the Trenches’ for the WW100 commemorations, worked closely with the late Alf Rendell on the book ‘Rendell’s Tauranga: Historic Tauranga From Above’ and contributed to another publication, ‘Western Bay Women: A Celebration of 125 Years of Woman’s Suffrage’.

Fiona co-organised and completed the Cemetery Restoration project over two years with the late Heather McLean, who was the 2018 recipient of the Tauranga Heritage Award.

Fiona also secured World War 1 Commemoration funding from Ministry of Culture and Heritage, and served as Secretary for WW100 Tauranga, which included helping to organise Anzac Day 2015, create the Anzac Day 2015 Education Pack and School Competition, a Lecture Event in 2017, the Children of Veterans events in 2015 and 2017, and Armistice Day in 2018.

"Her study of History continued at university and it has been to the benefit not only of Tauranga, but also the whole subregion of the Western Bay of Plenty, that Fiona has lived her passion for history."

There have been 19 recipients of the Tauranga Heritage Award since it began, and they read like a who’s who of hardworking people, organisations and community groups passionately devoted to heritage in the Tauranga area.