Major changes ahead for SH2/SH29A intersection 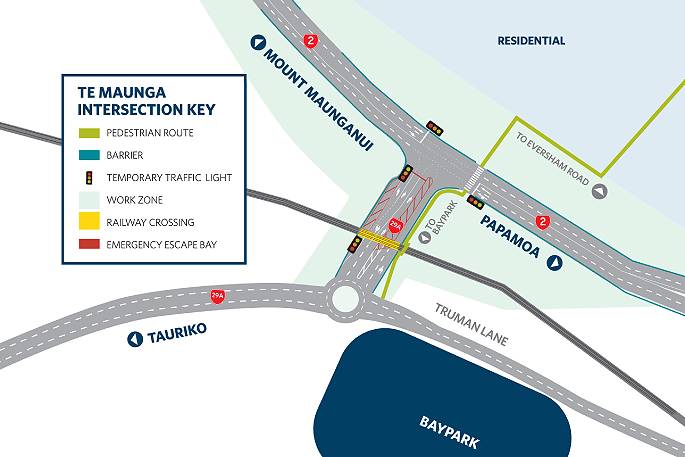 This graphic shows the layout of the new temporary signalised intersection. Supplied image.

A new temporary signalised intersection at the Te Maunga junction of State Highway 2 and State Highway 29A is scheduled to be operational this Sunday.

Waka Kotahi NZ Transport Agency Portfolio Delivery Manager Darryl Coalter says the signalised intersection will provide construction space to enable the retaining walls for the new Te Maunga interchange bridge to be built, one of the key elements of the Bay Link project.

“Converting the existing Te Maunga roundabout to a signalised intersection provides the team with more space to undertake the extensive work required to build up the walls supporting the new interchange bridge.”

The temporary intersection layout is a signalised T-intersection and includes a pedestrian crossing across SH2.

Some initial delays are expected once the signals are activated, as people adjust to the new layout, says Darryl.

“We’re introducing the temporary signalised intersection during the school holidays, when we typically experience lower traffic volumes. However, we do recommend motorists allow extra time for their journeys, especially during morning and evening peak times.”

Traffic flow will be monitored for around six weeks following the introduction of the new intersection layout and phasing of the traffic signals will be adjusted where required.

“We acknowledge this is a significant change for road users, however, it’s positive to see the progress being made at the southern end of the project.

"Motorists may have recently witnessed some other key developments such as the mechanically stabilised walls rising out of the ground and construction of a new roundabout near Baypark, now visible from SH29A.”

These bays provide an emergency space for any vehicle needing to clear the yellow zone when a train is approaching.

Waka Kotahi urges all road users to take extra care while adjusting to the new layout.

The temporary signalised intersection will be in place while work on the new SH2/SH29A interchange bridge at Te Maunga is underway.

Works to install the intersection are weather dependent and the opening may be delayed in the event of unsuitable weather or other unforeseen circumstances.