First chick of the season needs a name 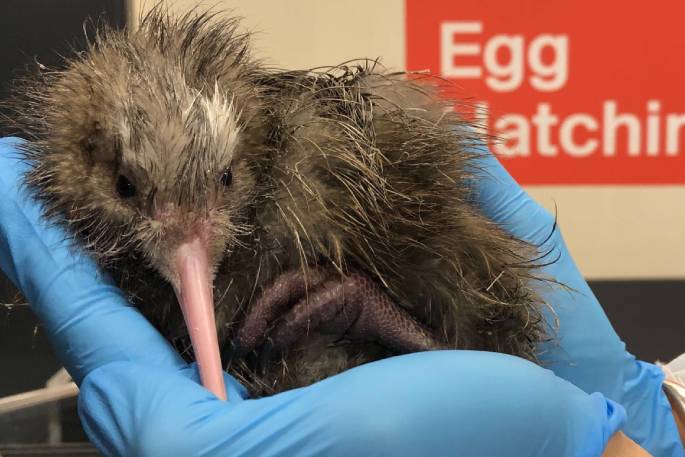 The National Kiwi Hatchery in Rotorua is celebrating the hatching of its first chick of the 2020 season – and its staff are calling for help from the public to name the little taonga.

After incubating for about 78 days, the 338-gram kiwi hatched on Monday, September 21, and emerged with one white eyebrow, which is unusual but not unheard of.

It is not yet known if it is male or female as kiwi do not have any “external features” to help gain that information, so feather DNA testing is the only way to know for sure.

Hatchery kaimahi are asking the public for help with the momentous task of naming the chick. The winning suggestion will receive a family pass to the hatchery.

Details on the competition are on the National Kiwi Hatchery Facebook page.

The season’s first chick has arrived just in time for the Ngāi Tahu Tourism-owned hatchery’s reopening on Saturday, September 26.

The hatchery has been closed to manuhiri since the nationwide COVID-19 lockdown.

“We would love people to come and visit us over the school holidays – and maybe even meet this delightful first hatch of the season,” says Kiwi Hatchery Manager/Tumu Kaitiaki Kiwi Emma Bean.

“While we are all holidaying in Aotearoa, make sure it’s on your bucket list to see our national taonga and namesake here at the National Kiwi Hatchery.”

Each year it incubates and hatches more than 100 kiwi chicks with 125 hatched last year. Only six of those chicks would have survived if they had been left in the wild.

Last season, 72 per cent of all brown kiwis hatched in facilities nationwide came from the hatchery.

Since 1995, the hatchery has successfully hatched 2,048 kiwi chicks with an average hatch success rate of more than 95 per cent.

The National Kiwi Hatchery is the only facility hatching Eastern Brown Kiwi, which are classified as “at risk and declining” by the Department of Conservation.

The National Kiwi Hatchery will be open Thursdays to Sundays from 8.30am to 2pm.

Entry fees have been discounted from standard rates and are $30 per adult and $15 per child.

One hundred per cent of visitor entry fees go directly to the National Kiwi Recovery Trust to support the hatchery’s conservation work.

There will be five tours per day, with the last tour at 1pm and visitors can make bookings and find more information on the website: https://www.nationalkiwihatchery.org.nz/

The National Kiwi Hatchery is located at the Rainbow Springs Nature Park complex, however only the hatchery is reopening.

Rainbow Springs does not yet have a reopening date.

The National Kiwi Hatchery is also supported by Kiwis for Kiwis and the Department of Conservations Wildlife Institution Relief Fund.