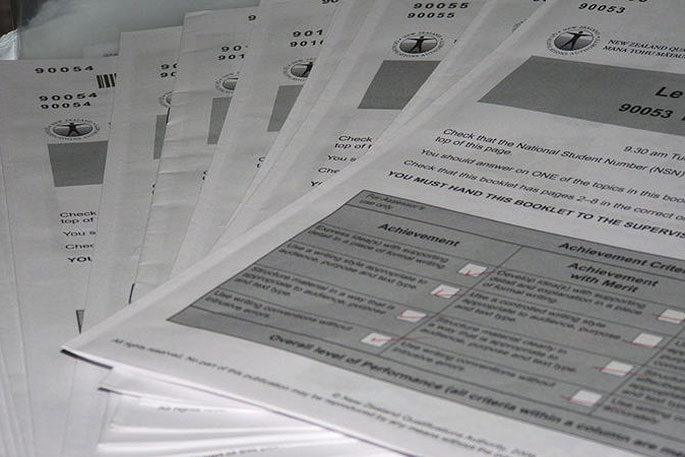 The pandemic has caused a 20 per cent slump in the number of NCEA credits schools have reported to the Qualifications Authority.

The authority says schools are cancelling or deferring some assessments and principals told RNZ they hoped their students would catch up before the end of the year.

"The reduction in reporting appears to be mainly due to schools reducing and deferring their assessment programmes to later in the year in response to the disruptions from COVID-19, in line with the advice provided to schools in May and June.

"We expect the number of results reported to increase over the next two months, as assessment is completed prior to examinations."

The chairperson of the PPTA's Principals Council, James Morris says 20 per cent is in line with what he has been hearing from other principals and he expect that figure to reduce by the end of the year.

"It will be interesting to see the final tallies, how much lower they are. I know, with the fact there's been the extension of when the exams take place, there's going to be a little bit more time at the other end for some catch-ups as well. So what I'm hearing is that there will be probably a greater amount of later credits going in."

Morris says schools are focusing on students who planned to leave school at the end of the year because returning students can catch up next year if necessary.

"One of the benefits of NCEA is that even if students aren't able to achieve it at the end of one year, they can always pick up the credits in the following year I think a lot of schools have been really focusing on enabling the students who are leavers, so those who are possibly leaving at the end of level two but in particular level three, just making sure that they within this year will have the credits that they need for UE and level three as well."

The principal of Māngere College in Auckland, Tom Webb, says despite the disruption, the school's Year 13s are only slightly behind last year's rate of achievement, while other students have recorded about the same number of credits as last year.

"What we found, particularly coming out of the first lockdown is students being really engaged as they came back to school, really missing the time away from school and just wanting to get stuck in."

Webb says students have been a bit slower to return to classes following Auckland's level 3 lockdown, but they are showing the same motivation to do well.

He says the decline in results reported to NZQA might reflect a delay in reporting from schools rather than an actual decline in achievement.

He says his students' results are even better once learning recognition credits are added.

The principal of Albany Senior High School, Claire Amos, says her students have largely caught up after being behind.

"When we came out of the second lockdown it did look a little bit dire, it looked like we were really, really well behind because I think for a lot of students and a lot of teachers they were just about to do all their catch-ups from the first lockdown and then we headed into the second lockdown.," she said.

"But what we've actually found now is that with a real sense of flexibility being encouraged we're back to where we would be about this time of year already, so in a sense we've caught up."

Amos says the Qualifications Authority has encouraged schools to be more creative about how they gathered evidence that students have demonstrated the knowledge and skills required for achieving their NCEA standards.

"It was definitely a move towards that idea of gathering of evidence of learning rather than the traditional assessment events or tasks.

"It's actually encouraged our staff to approach NCEA in exactly the creative ways that we should have been doing all along."

Amos says with the addition of learning recognition credits, the school's students could end up achieving more credits than in previous years.