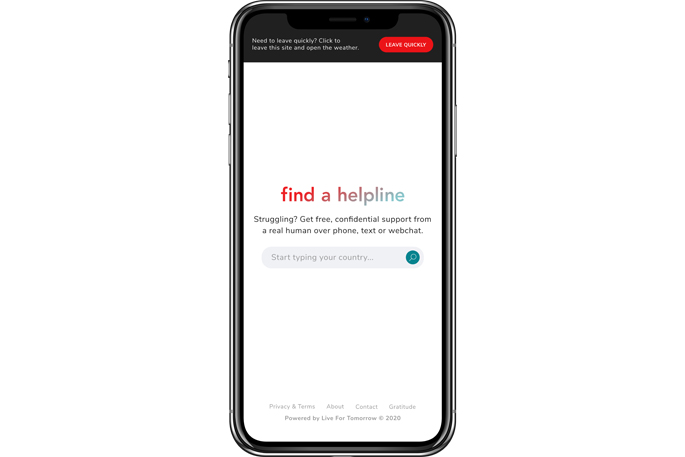 Thousands of Kiwis in crisis are set to benefit from the launch of a new charity’s technology which can reduce the time it takes to select and contact a suitable mental health helpline.

According to latest government statistics, nearly a quarter of New Zealand adults have experienced 'poor' mental wellbeing on the World Health Organization's WHO-5 scale.

The charity is set to offer the world’s largest database of mental health helplines to those experiencing distress providing a new, more user friendly, online interface embedded on media websites.

Users will also be able to access the database of over 1,600 helplines directly through the charity’s Find A Helpline website in the coming weeks.

Elliot Taylor, founder of Live For Tomorrow, says the challenges faced in searching for the right helpline at a time of crisis can be a barrier to seeking support.

“What we know is that people in crisis can struggle to connect with helplines that best fit their needs for a range of reasons.

“These barriers can manifest in a number of ways - including the stigma of reaching out for help.

“Our aim is to remove the perceptual and logistic barriers and make the first step taken to connect with support as seamless as possible.

“We’re achieving this through a new web-based widget which can be integrated into a news or social media site around content which may be a catalyst for a user to seek help.

“The user can confidentially select the right service to fit their specific needs and know straight away whether they offer support for the deaf or hard of hearing community via text message, are familiar with the issues facing LGBTQ+ youth or even just knowing which hours they are open - an issue particularly relevant to regional services which aren’t always funded for 24/7 support,” he says.

Live For Tomorrow has also partnered with the world’s leading short form video app, TikTok, to help promote mental health and wellbeing resources and content on the platform.

"Keeping people on TikTok safe is our top priority and we are at our strongest when we work together," says TikTok spokesperson Arjun Narayan.

The charity has also beaten out international competition to become the only Southern Hemisphere entrant accepted into the Headstream Accelerator programme in San Francisco - which is supported by a Melinda Gates founded investment and incubation company, Pivotal Ventures.

Elliot says the financial funding and international recognition from the programme has opened a number of doors - including the inclusion of their technology in the online resources of the Pandemic Crisis Services Response Coalition in the United States, a coalition of leading mental health organisations across the country.

He says although still in beta testing at the time, the chance to be the primary bridge between helplines and the public during the pandemic has meant they are well placed to expand their offering globally.

“We're launching in New Zealand in support of Mental Health Awareness week, but within the coming weeks, we'll launch in Australia, the Pacific, the UK, Northern Ireland and in Canada, the Caribbean and the US.

“Once our service covers the whole English-speaking world, then we will look for support to be able to localise the tool and get it into different languages. Our aim is to have one portal that, wherever you are in the world, and if you're struggling, within a matter of clicks you can talk to someone confidentially about what's going on,” he says.