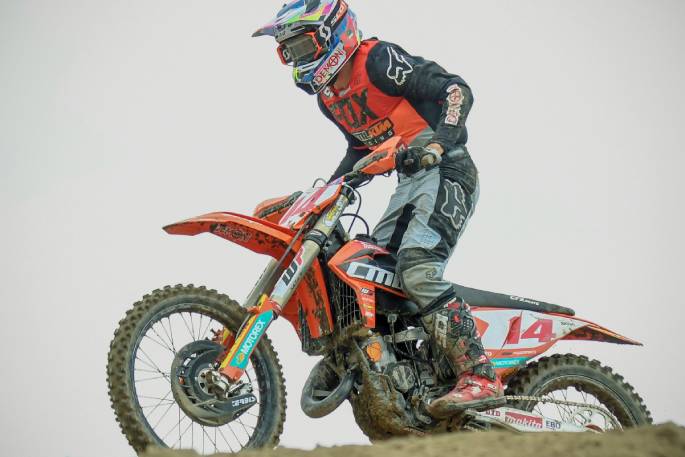 The New Zealand motocross scene burst back into life with a "new normal" COVID-19 atmosphere during a rare double-header event at Mercer at the weekend.

The popular annual North Island Motocross Championships and Pukekohe Sand Prix attracted champions of the past and present as riders rejoiced at being able to once again hit the track, all thanks to strict health measures being observed due to the ongoing pandemic.

And it was almost business as normal too for the high-profile CML KTM Race Team.

Auckland-based multi-time national MX2 champion and current MX1 No.3 Hamish Harwood was thrilled to be at the two-day meeting to raise the flag for the distinctive orange team, racing alongside his KTM team-mate, rising young star Cobie Bourke, also from Auckland.

Between them, they won two of the three premier senior grades – Harwood winning the MX1 crown and Bourke taking top spot in the senior 125cc class. Oparau's James Scott (Kawasaki) won the other glamour division, the MX2 (250cc) class.

"It was a pleasing result, especially considering it was pretty much the first big event of the new season," says Harwood.

"I have not raced much on the bike lately because of the pandemic and I'm nowhere near to full fitness."

Bourke's performance over the weekend was perhaps even more impressive – he not only won the senior 125cc class with 1-1-2 results, but the just-turned 16-year-old also rode a KTM 250SX two-stroke bike to manage ninth overall in the MX1 class.

"It's the first time too that I've raced two classes at this level for quite a while," says Bourke.

"It was great to race the MX1 class and learn from the senior riders. There are a few things I still need to work on, but I was pretty happy with the result. I ride with Hamish (Harwood) during the week and I work with him as a builder, so I learn so much from him anyway.

"It was our first big event for the season and nobody was really ready to go at such short notice – so a big thanks to the Pukekohe club for making it happen."

The next big event for Harwood and Bourke will be to contest the annual Michael Godfrey Memorial Motocross near Christchurch next weekend.