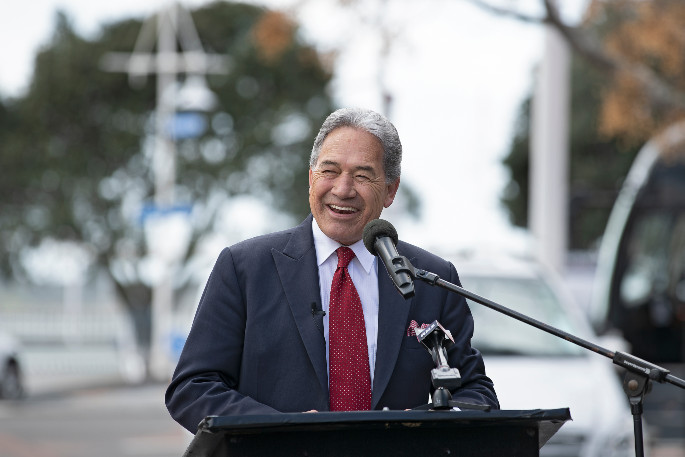 Winston Peters’ campaign bus rolled into town and with that came election promises.

A crowd of around 60 people gathered at Red Square to hear the deputy Prime Minister speak - the small number because of COVID restrictions, he says.

“I quite enjoyed today's meeting. If it hadn't been for that darn artificial lockdown, then we'd have had the place packed. But even so I was very pleased with the turn out.”

“We need to support facilities that create world leading science that benefits, not just this region but also New Zealand as a whole. This will allow us to learn, grow and develop skills that create opportunities to add value to exports.

“This is the fastest growing city in the country, but it needs far more investment to keep young people here, to add value here and aquaculture is one of our most exciting future industries.”

Peters says the biggest issue facing Tauranga is how quickly it is growing and that level of growth requires a lot of funding.

“Tauranga’s issues have been and will be for some time, the fact that their population growth outstretches their census records by a number of years, and as a consequence, it's always behind the eight ball in getting advance planning support from central government.

“Tauranga has got a fast-growing population, although that's exciting, it comes with a huge cost.”

He says central government need to provide funding based on actual percentages of past population increases rather than census data.

Peters also waded into the debate over Tauranga City Council’s decision to introduce a Maori ward in the next election.

“I cannot believe that they're going to go into Maori ward when they've had two Maori in the last 50 years for long periods.

Peters says if Maori voters want Maori on council then they need to vote them in and that there should have been a referendum to make the decision.

A small applause broke out in the crowd of mainly senior citizens when he announced his stance on the ward.

He says the election in October is like no other in history.

“The reason for that is that we are facing an economic crisis, not just here, but worldwide. All around the world, the economies are in decline or in recession because of an enemy unknown called COVID-19.”

Peters remains confident he will be back in parliament after the election.

“I'm a leading political party, that's going to decide the outcome of this government at the next election.”

When asked if he has a plan B his response was: “I've been 27 years making it back into Parliament”.

Indeed Tauranga population has grown beyond investment. Traffic, water being both under great stress. Route K needs another on ramp at the Pioneer village as I think was originally planned as Greerton is a huge bottle neck after its botched redesign. Water restrictions over long periods will be the norm and dying gardens and lawns the norm too. I’m not a Winston supporter but he is right on investment and on tokenism. I foresee a other division in council, just what we don’t need. Maori ward not put to the ratepayers as it would be defeated so go figure.

He’s right about Tauranga growth getting away from the Administrators, both locally and Nationally. Marine Biology is good too, for the whole country... and it is good to hear some common sense on Maori Wards. But I think Winston enjoys being the Kingmaker too much and ANY party forming a coalition with NZ First is putting itself at risk. I believe their time is over and their "good" policies have already been absorbed into other electoral platforms. Still, I could be wrong, and the elections will show whether there is still a place for Winston and NZ First.